Leeds United play two friendlies this Saturday with an XI taking on Girona FC at the Manchester City Academy at 3.00pm while the first team travel to Sardinia to play Cagliari Calcio at the Sardegna Arena at 7.30pm BST. The two friendlies follow the trip to Australia where Leeds faced Manchester United and Western Sydney Wanderers.

Leeds lost 4-0 to Manchester United in the first game of the Australia tour but what can you learn playing a friendly on the other side of the world with a weakened side against a team who have one player worth more than your entire club? Probably not a great deal more than we already knew. The Leeds line-up was short of four or so players we would expect to start next season and as much as they are our old rivals, the result doesn’t matter a feeling shared by Bielsa as he flew in and out for the minimum time possible.

There were a lot of positives to take from the game against Sydney. The team looked strong and fit and the attacking play and movement was fantastic, we just lacked in the finishing department again. Harrison created a lot of chances from dangerous crosses again, Bogusz put in an impressive display in the middle and took his goal well and Hernandez proved his class again with the winner. On the negative side Roofe picked up a knock and will be out for four weeks. Patrick Bamford continued his lean spell up front, but looks certain to lead the line at the start of the season with Roofe now out.

Meanwhile back at home a Leeds XI beat Tadcaster 5-1. Ben White impressed again and looks to be a very good footballer. Ryan Edmondson continued last seasons goal scoring form for the U23s with a hat-trick, he will be knocking on the door of the first team next season for sure.

The Cagliari game may be the best opportunity for Bielsa to play the eleven he expects to start the season so a strong team may be on display. Long term injuries to Luke Ayling and Tyler Roberts will continue to rule them out whilst Kemar Roofe also joins the injury list. With Gaetano Berardi suspended for the first game of the season could we see Cooper and White start alongside each other for the first time? 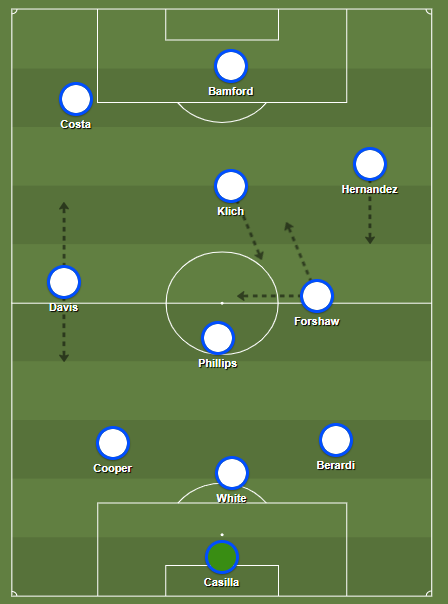 4 at the back with White and Cooper in the middle? Berra on the right?

Also midfield, who played out wide Costa and Pablo? Klich pushing on from the middle?

We started off with Pablo as a right wing-back

Didn't watch the Cagliari game, how did we line up?

4 at the back with White and Cooper in the middle? Berra on the right?

Also midfield, who played out wide Costa and Pablo? Klich pushing on from the middle?

Leeds players return to training sharp and raring to go

Leeds United players returned to training at Thorp Arch on Monday and initial reports indicate that the players have emerged from lockdown in good shape. Although it's been ten long weeks since a competitive...

It is 31 years to the day since we lost the great Don Revie, the man who revolutionised Leeds United and put them at the top of English and European football for an unprecedented twelve years. Revie...