Good Morning. It's Friday 15th November, and here are the latest headlines from Elland Road...

Sheffield Wednesday have been charged by the EFL for misconduct around the submission of their accounts for the 2017/18 season, for questions marks over the circumstances surrounding the sale of Hillsborough stadium for £60m.

Our fellow Yorkshire neighbours are likely to be in breach of Financial Fair Play regulations, which limit losses of Football League clubs to £39m over three years. To address that, Dejphon Chansiri sold Hillsborough Stadium to another company that he owned for £60m. That generated a huge profit, which could then be offset against the losses, meaning Wednesday were then compliant with FFP.

Where does this leave Derby, Reading and Villa? Reading sold the Madejski for £27 million, substantially less than Hillsborough. It is smaller, but it is more modern and it is in Berkshire, where land prices there are significantly higher. Villa sold Villa Park for £56m which is ridiculous when you consider West Ham sold Upton Park for 40 million. Then there is Derby! 80 million for Pride Park. Surely they should have been the first club to have been charged?

What should their punishment be? Can Tom Lees be to blame?

Tweak in Bielsa's tactics made the difference to Costa - Mills

Last Saturday we finally saw a far improved performance from Helder Costa and according to ex player, now soccer pundit Danny Mills, he credits Bielsa for tweaking his tactics!

It was a bit more of a 3-4-3 formation, tweaked a little bit. More or less with wing backs and of course that just allows Costa to play a little bit higher up the pitch and to use that pace and ability go forward – not just having to defend as a wing-back. Sometimes it’s those little changes, those small, little, tactical changes that can often help a player out, release you of your defensive duties and allows you freedom going forward.

Leeds fans top the attendances both home and way

Here’s a look at the average Championship home attendance plotted against the away attendances. 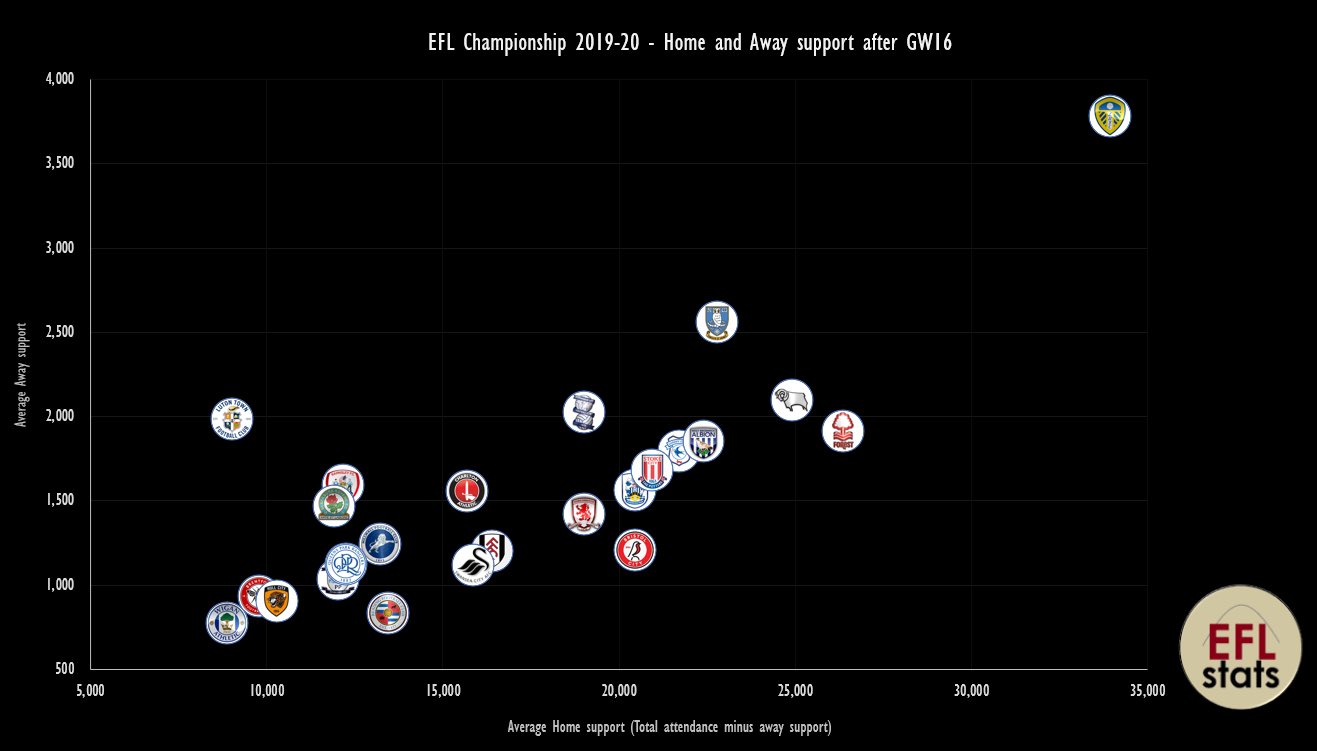 We all know that Leeds Utd is a well supported team, but it is the 4th largest city in England, and is the largest City in the Country to have just one football club. This is what the table would look like if you divided the attendance as a percentage against the ground capacity.

The tax man would be upset.

It's illegal what they've done,that's why they've been charged.
As would you with the above scenario, if you were caught, they have been.

gessa wrote: ↑
Fri Nov 15, 2019 8:45 am
Not sure the other clubs will get any sanctions, Wednesday aren't being done for selling the ground but putting the sale in the wrong set of accounts.

But that is like me adding in this years profit to last years tax return to bury earnings.

The tax man would be upset.

Meanwhile Manchester City have failed in an initial bid to have the Court of Arbitration for Sport (Cas) halt Uefa's investigation into a possible breach of Financial Fair Play (FFP) rules.

City have been referred to Uefa's financial watchdog, the Club Financial Control Body (CFCB) and if found guilty could face a Champions League ban.

Its inept from their owner, the issue isnt that he sold the stadium its because he backdated it. If you Google him he seems like a rich kid spending his trust fund. Makes you wonder if he is much of a business man at all.