Leeds United’s best ever left back?


The regular contributors to our message boards are spending lockdown debating the best Leeds United players for each position, at the moment they are debating left backs. So, who is the greatest?

Left back is position Leeds United have been blessed with some quality players over the years. Grenville Hair was a one-club man playing his entire professional career with Leeds United before passing on the baton to Willie Bell, an unsung hero of Leeds United's rise between 1962 and 1967. Terry Cooper dominated during the Revie era, scoring the goal that won the League Cup in 1964. The position has also been one filled with great success by some of Leeds United’s most versatile players. Paul Madeley, Trevor Cherry and Frank Gray all extremely capable left backs as well as a number of other positions in both defence and midfield. Here is the top five as voted by our contributors.

The original "Super Sub" and the most versatile player ever to wear the Leeds shirt...and arguably in the whole history of the Football League. In his 724 first team appearances, spread over an incredible 17 year span at Leeds, he scored 34 goals, playing in every position except goal - perhaps hindering his international selection, as he never had a regular first team position at Leeds. Nevertheless, he still earned 24 full England caps. Paul retired from football in 1980 and worked firstly for a sport shop, before opening a decorating supplies shop in Horsforth.

Born Huddersfield, 1948, he signed for his home town team in 1965 and captained them to the Second Division Championship in 1969-70. He moved to Leeds for £100,000 in 1972, and, while formerly almost exclusively a central defender, his ability to play midfield and full back made him a valuable acquisition. He won 27 caps for England and had the honour of captaining his country, but he was also one of the few England players to be sent off. He won a League championship medal in 1974 and played 477 full games and 8 as substitute, scoring 32 goals before joining Bradford City as player manager and led them to promotion to Division 2. 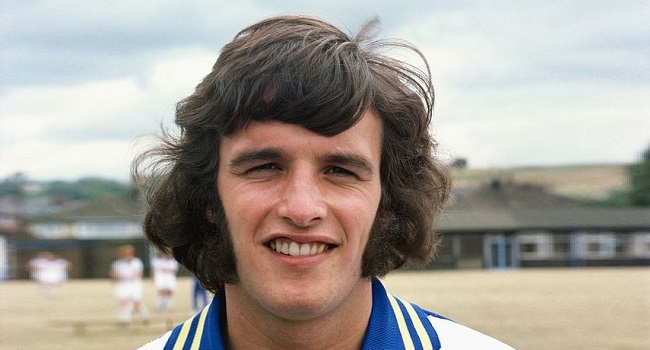 Younger Brother of Eddie and Father of Andy, Frank was born in Glasgow in 1954. Winner of 32 Scottish caps. Frank first joined Leeds in 1970, emulating brother Eddie's feat of scoring on debut, he quickly settled in midfield, gaining 5 under 23 caps before moving to left back. Moved to Nottingham Forest in 1979, for a then club record £500,000, where he won a European Cup winners medal to compliment the runners up medal gained at Leeds. He returned to Leeds in 1981 for £300,000 and became Scotland's left back in the 1982 World Cup. In all he made 396 starts and scored 35 goals before joining Sunderland in 1985.

Born Melbourne in 1965. Tony joined Aston Villa in 1982 and won 11 England under 21 caps before a 475,000 move to Chelsea in 1987. In his four years at Stamford Bridge he gained 6 of his 15 full caps and a Second Division championship medal and also scored the winner when Chelsea lifted the 1990 Zenith Cup at Wembley. He was signed by Howard Wilkinson for £1.3m in 1991 to solve the problem left back position and became United's best player in that position since Terry Cooper. His cultured play, positional sense and lightening speed saw him send a stream of crosses, many converted by Lee Chapman. He was no slouch in the goalscoring stakes scoring in the 4-3 Charity Shield win over Liverpool and was also dangerous with free kicks anywhere within scoring range. Made 204 starts and another 4 off the bench with 6 goals.

Joined Leeds in 1961 as left winger, but Revie was unable to place him in the first team on a regular basis until 1967, when “TC” replaced Willie Bell at left back. Initially dependant on Hunter for defensive cover, he developed in ability and confidence in the following seasons, resulting in 20 full caps for England. TC's old skills as a winger led him on many a foray down the left, to pass unerringly to the Leeds forwards - but it was he who scored the goal which won Leeds the League Cup in 1968. A broken leg at Stoke in 1972 subdued him somewhat and in 1974, after 240 games for Leeds, he moved on to Middlesbrough, then spells at both Bristol clubs and Doncaster.


Who would you have as Leeds United’s greatest ever left back? Join the debate on our message boards.
0 Comments