Leeds United will face the toughest of starts to the Premier League campaign when they travel to Anfield on 12th September to face Champions Liverpool. A battle of Champions vs Champions, Jürgen Klopp’s Heavy Metal Football vs Bielsaball is a tantalising prospect for Leeds United’s first game back in the topflight for sixteen years. Leeds United’s record is not great at Anfield only managing 8 wins in 56 visits, the last of those back in 2001 when goals from Ferdinand and Bowyer gave Leeds a 2-1 victory. The teams have faced each other twice since Leeds were last in the Premier League, on both occasions in the League cup with Liverpool winning both games 1-0 and 2-0.

The week after Leeds will play fellow promoted team Fulham at Elland Road in their first home game of the season. Back in June Bielsa taught Parker a footballing lesson as Pablo Hernandez delivered a second half masterclass to lead Leeds to a 3-0 victory. It was an important result which gave the team the confidence to go on the run which ultimately lead to Leeds lifting the Championship trophy. Scott Parker’s men beat Brentford in a rather lacklustre play-off final to secure their place in the Premier League but Leeds may be eyeing this game as an early change to get some points on the board. 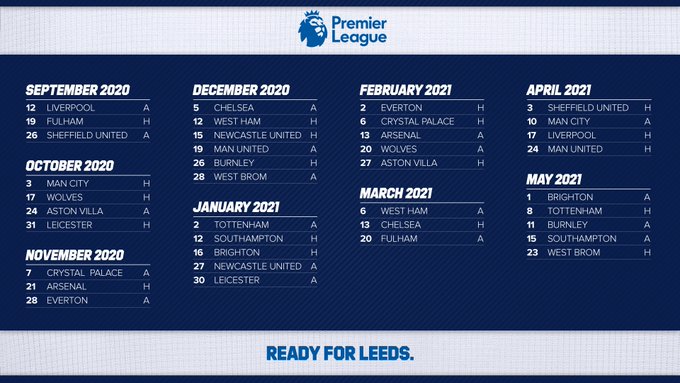 A Premier League Yorkshire derby against Sheffield United away at Bramall Lane comes in game three, before Leeds face another stern test against Pep Guardiola’s Manchester City visit Elland Road at the start of October. As a nice early Christmas present, Ole Gunnar Solskjær will gift Leeds three points as Leeds renew their rivalry with Manchester United on Saturday 19th December with a trip across the Pennines to Old Trafford. April 2021 could be a month to remember or one to forget as Leeds play Sheffield United, Manchester City, Liverpool and Manchester United in the space of four weeks. Leeds final away game of the season is a trip to the south coast to face Southampton, before the Whites round off the Premier League campaign with a home clash with fellow promoted team West Brom.

All fixtures are subject to change for broadcast selections.
0 Comments