Aston Villa may have been vying to go top of the Premier League table on Friday night but Leeds United put them in their place. Dominating from almost the start, Leeds sealed the three points with a twenty-minute second half hat-trick from Patrick Bamford. It was an exceptional team performance from Marcelo Bielsa’s side and not a single player should be disappointed with their performance. Here is how our members rated them all…


Illan Meslier – 8
Solid and commanding as ever. One excellent save and reacted quickly to a one on one situation, brilliant for such a young keeper.

Stuart Dallas - 8.5
Mr Consistent, was everywhere for us tonight and made some excellent tackles. Kept Jack Grealish quiet for the majority of the game.

Luke Ayling - 9.5
Had a very solid game out of his natural position, a real captain’s performance. One error but he made up for it with the goal line clearance.

Robin Koch - 8.5
Really has been the unsung hero of our season so far. An absolute rock. Was he really only £13 million?

Gjanni Alioski - 8.5
Lots of question marks over whether he could cut it in the Premier League bur credit where credit’s due, gave a real battling performance and linked up excellently with Harrison. Always puts in 110% when he wears the shirt 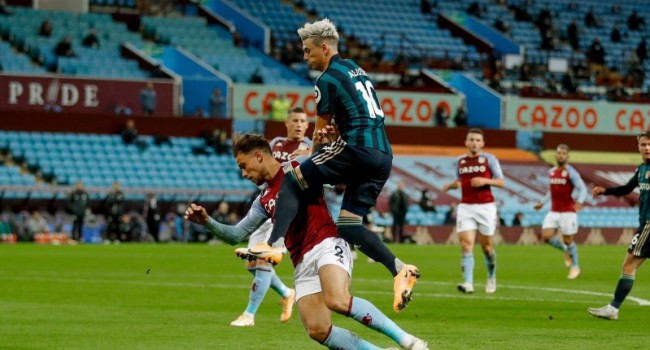 Pascal Struijk - 6.5
A shame to pick up a yellow card so early, had been playing well up until that point. Will hopefully take some comfort knowing that Bielsa has done this to others in the past. Would still expect him to start against Leicester.

Helder Costa - 8
Had an excellent evening all round and topped it off with an assist. Worked the Villa defenders int the ground.

Mateusz Klich - 9
A fantastic footballer, an excellent evening playing out of his natural position, worked well in the picot with Shackleton, really makes us tick. Also got an assist in.

Rodrigo - 8.5
Contributed a lot to our overall dominance and seems to bring out the best in Bamford. Was vital for that first goal, allowed Bamford to find space in the box to pick up the loose ball.

Jack Harrison - 9
An excellent performance, linked up well with Alioski and was a constant threat on the cross. Looked hungry to score as well. Matty Cash will be having nightmares about him for the next few weeks.

Patrick Bamford - 10
A few grumbles at half time due to his misses early on but put things right in the second with a very well taken 20-minute hat trick. Goals anyone would have been proud of, we can feel confident that with Bamford leading the line. Six goals in six in the Premier League. A man of the match performance.

Jamie Shackleton - 8.5
Brought so much energy and pace to the side, runs around like a tornado. Got involved regularly in the box, an excellent performance. Between Klich and Shackleton they dominated the space in midfield, Barkley and Grealish were barely noticeable.

Pablo Hernandez - 7
Didn’t really get into the game, lacking match sharpness but that will come. Still showed some nice touches, should have maybe had a goal towards the end.

Raphinha - 7
Has the look of a player who will cause absolute havoc in the Premier League. Looks exceptionally dangerous whenever he is on the ball. One of those players who time seems to slow for, very excited about this one.


Join the debate on our message boards
0 Comments