This year has not been a good year as far as Leeds United legends are concerned with the loss of Norman Hunter, Trevor Cherry and most recently Jack Charlton. Big Jack was a legend of the game and an important part of the Elland Road scene for twenty-three years, making a club record 773 appearances. In honour of the great man, Leeds United have today announced that the East Stand at Elland Road will be named in honour of the legendary defender. His legacy will now be engrained at Elland Road forever and he joins fellow greats John Charles, Norman Hunter and Don Revie who also have stands named in their honour.

Born 8th May 1935, a native of Ashington, he attended Hurst Park Modern School, represented East Northumberland Schools and played for Ashington YMCA and Ashington Welfare before joining Leeds as an amateur in 1950, turning professional in May 1952. His uncles George, Jim and Jack Milburn all starred for Leeds United and it was Jim who recommended the gangling Jack Charlton to Leeds. After National Service in the Royal Horse Guards, he occupied the Centre Half spot vacated by John Charles, who had switched to the attack. In October 1957 he played for the Football League against the League of Ireland. International honours seemed likely, but his career reached a plateau as he found himself in a struggling United team.

The appointment of Don Revie was the catalyst for change in the fortunes of the big stopper. As a player who had just arrived at Elland Road, Revie questioned Charlton's tactical awareness and in particular his tendency to make long, sometimes fruitless, forays in attack and then struggle to get back to his defensive duties. Revie made it plain that he would not allow that if he was manager. So no doubt Charlton would have had a few misgivings when Revie was appointed manager soon afterwards. Revie pandered to Charlton's attacking instincts by playing him at centre-forward on a few occasions but despite scoring several goals in that capacity, it brought home to Charlton just where his strengths lay.

Revie for his part built his defence around the tall Geordie and gave him free rein over organizing Gary Sprake, Paul Reaney, Willie Bell and Norman Hunter into the most formidable defence in Britain. After the injury to the inspirational Bobby Collins, he had a brief spell as Captain but gave it up because of his superstition of coming on to the pitch last. With Norman Hunter alongside, Charlton, a supreme header of the ball and excellent tackler, developed into the best Centre Half in England.

He won a belated first cap in 1965 against Scotland when his brother Bobby, a household name with Manchester United, was in the side. The brothers played vital roles in England’s 1966 World Cup success and Jack won thirty-five full caps and scored six goals, as well as representing the Rest of the United Kingdom against Wales, along with two other Leeds players, Billy Bremner and Terry Cooper, in a game to celebrate the investiture of the Prince of Wales on 28th July 1969. He also represented the Football League, scoring twice in six games, and appeared in an unofficial International against a Mexico XI in Guadalajara on 4th June 1969 in the run up to the preparations for the 1970 Mexico World Cup and two games for England "B" in four days from 20th May 1970, when he played against Columbia in Bogata and against the Ecaudor team Liga Deportiva Universidad in Quito, just before that World Cup.

He was Player of the Year in 1967. He figured in United’s early successes under Revie, winning two Inter-City Fairs winners' medals in 1967-68 and 1970-71, the League Cup in 1967-68, the League Championship in 1968-69 and won an F.A. Cup Winner’s medal in 1971-72, two days before his thirty-seventh birthday. He played his final match for Leeds United in a 1-3 defeat by Southampton at Elland Road on 28th April 1973. It was his six hundred and twenty-eighth League match and his Seven hundred and seventy-second game of his Leeds career. Both are club records.

The following year he became Manager of Middlesbrough and was named Manager of the Year in his first season as Middlesbrough swept to the Second Division title in 1973-74 by a record points margin. He stayed at Ayresome Park for four years before leaving on 21st April 1977. He then applied for the position of England Manager, after Don Revie had left, but was not even interviewed, possibly due to his close association with Don Revie over the years. In October 1977 he took over as Manager of Sheffield Wednesday and revived their flagging fortunes before quitting after six years in the position in May 1983. 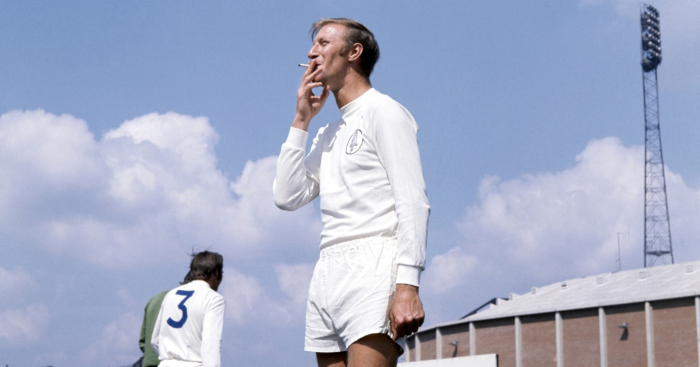 He then re-joined Middlesbrough for a couple of months in early 1984 but soon left when his mother's cousin, Jackie Milburn, asked him to take over at Newcastle United in June 84. He left Tyneside in August 1985 after keeping the club up and signing Paul Gascoigne, but a bit of acrimony from the disgruntled fans. It seemed that after a bright start to his Managerial career with Middlesbrough, his natural contrariness had seen him quit four clubs in eight years and it seemed as if his League Management career was over. After thirty-five years in football and twelve in club management, Jack Charlton spent the autumn of 1985 in his favourite pursuits of hunting, shooting and fishing and generally enjoying life.

In December 1985 Des Casey, President of the Football Association of Ireland, rang out of the blue to take him on. The first Englishman to hold the post, he steered them to the European Championship Finals in 1988, where his side pulled off a famous victory over England. Charlton finished runner-up in World Soccer Magazine’s Manager of the Year poll. To prove that rare Irish victory was no fluke, in 1990 he led the Republic to the World Cup Finals for the first time. They reached the quarter finals before losing to the hosts, Italy. Such deeds earned Jack the freedom of Dublin.

He retired in January 1996 after the Irish just failed to qualify for that year’s European Championships in England. Jack was inducted into the English Hall of Fame in 2005.
0 Comments