Brighton are the visitors to Elland Road this Saturday for a traditional yet rare 3pm kick off. Many of the older generation (you know who you are) will recall that once upon a time almost all games would kick off at 3pm on a Saturday afternoon. I'd be flicking over every sixty seconds from Ceefax to Teletext to see the latest score. The game also marks the first time Ben White will face Leeds since his return to Brighton. White was a key part of Leeds United's promotion push, at the heart of the defence alongside Liam Cooper.

Leeds will be without star midfielder Kalvin Phillips who serves a one match ban for reaching 5 yellow cards. Pascal Struijk is set to deputise. Diego Llorente has been declared fit by Marcelo Bielsa but is not yet ready to pick up his first start for the club since joining from Real Sociedad in the Summer. All rounder Luke Ayling will partner fit again skipper Liam Cooper at the heart of Leeds defence. Tyler Roberts is available again for the visit of Brighton but Robin Koch and Adam Forshaw remain on the treatment table. The big news is that Illan Meslier is also missing for Leeds, the rumours are this is Covid related buy we await confirmation from the club. Bielsa stauchly defended Kiko Kiko Casilla during the pre-match press conference and it is the Spaniard who will start between the sticks.

Brighton will be without Aaron Connolly, Danny Welbeck, Florin Andone, Jose Izquierdo and Tariq Lamptey who are all ruled out with injuries. Adam Lallana and Steven Alzate are ruled out with illness. It's touch and go whether former Leeds favourite Ben White will play against his former (loanee) club? He withdrew from Brighton's FA Cup clash with Newport County on Sunday evening with a thigh problem. It would be nice to put more distance between the two clubs, especially after the Brighton hierarchy refused to sell either White or Lamptey to Leeds in the Summer as they didn't want to sell to a club they saw was equal to them. 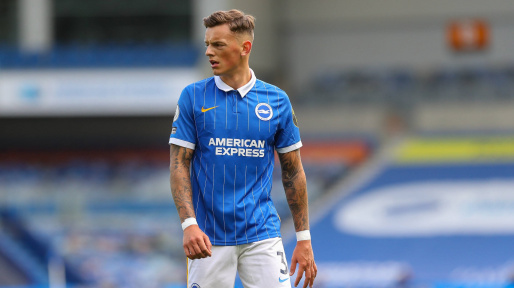 Leeds United have lost seven of their past nine league matches against Brighton. However, they did win the most recent league fixture, in the Championship in March 2017. This is the first top-flight meeting since Leeds won at Elland Road in May 1982. Leeds have never lost at home against Brighton in the top flight, winning two games and drawing one. Leeds could win three consecutive Premier League home games for the first time since 2001 under David O'Leary. An eighth win of the season would equal Leeds' total number of victories from their last top-flight season in 2003-04. A seventh Premier League clean sheet for Illan Meslier would equal the record in a season for a goalkeeper before his 21st birthday, set by Joe Hart in 2007-08.

Brighton are winless in nine Premier League games, the longest current run in the division (D5, L4). The club's top-flight record is 10 matches without a victory. Their past four league wins have all come in away matches, most recently at Aston Villa on 21 November. The Seagulls have 14 points after 18 games. They had at least 20 points after 19 fixtures in their three previous Premier League campaigns. Neal Maupay has scored in three of his four league appearances against Leeds, all for Brentford in the Championship.

I wonder how anyone could ever imagine unquiet slumbers for the sleepers in that quiet earth.

Make yourself sound like one of the Bronte sisters...

There were 10 million green bottles hanging on a wall

Was hoping for "Whispering Grass" ... but like all stars

We did well to turn a 0-1 deficit into a gritty goalless draw.

We did well to turn a 0-1 deficit into a gritty goalless draw.

Up to 5 signings
Citeh's bench v Borussia Monchengladbach
Top 5 Leeds forums
Leeds v Aston Villa Correct Score/Scorers....
When you played...What positions did you...
Is it offside?