Good Morning. It's Monday 10th May, and here are the latest headlines from Elland Road...

Leeds turned on the style against an in form Spurs team, and gave them a master class on team work. Many (including myself) were left bemused an hour before kick off when the team sheet was disclosed, noting that Phillips, Rodrigo and Raphinha would all start on the bench. Our concerns would soon to laid to rest when Dallas (waiting on the back post) smashed the ball into the roof of the net, with less than 15 minutes on the clock.

Harrison's inviting cross from the left hand side byline into a crowded penalty area found Reguilon. With Bamford snapping at his heels, the Former Real Madrid defender stuck out his leg out to try and block the ball, but instead sent it goalward. Lloris could only parry the the ball into Dallas' path!

This was no more than Leeds deserved. Minutes before, Bamford was denied by a sprawling Lloris after good work by Harrison. Ten minutes later Spurs were level, albeit against the run of play. Delli Ali's inch perfect pass to Son carved the Leeds defence open. The South Korean fired the ball past the helpless Meslier bagging himself his 17th goal of the season.

The Whites deservedly regain the lead just before half time. Harrison fed Alioski down the left. The North Macedonian rolled the ball back to Bamford who made no mistake for six yards.

The Whites continued to dominate during the second half, and although Spurs had their moments, Leeds deservedly extended their lead with five minutes left. Raphinha broke the offside trap, and with acres of space broke into the Spurs penalty area. Unselfishly, he passed the pall back to Rodrigo who slotted the ball into the left hand corner. 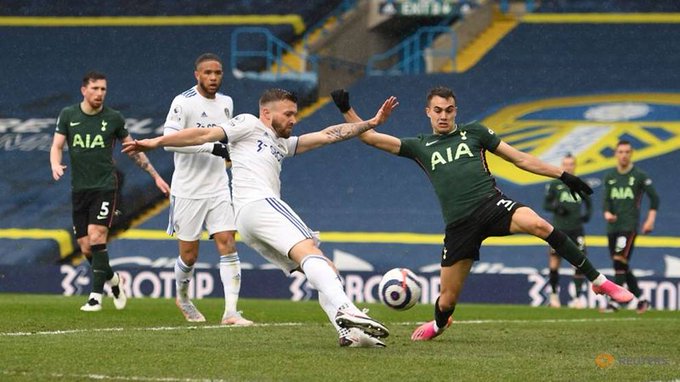 Should more be done to protect people from cyber bullying on social media? Not a week goes by when dozens of celebrities aren't publicly mocked for their weight, appearance, comments or ethnicity. If you are a celebrity, should you just take it on the chin, or should the Mark Zuckerberg's of this World do more to protect them. Surely, its more import to protect the children that are being bullied. We know how cruel some kids can be!

Last year Carole Flack took her own life after being attacked by cyber bullies, and earlier this year Karen Carney almost went the same way. Her foolish, and unprepared comments about Leeds following their 5-0 route of West Brom, caused thousands of fans to retaliate on social media, leading to Carney breaking down. She told BT Sport...

I came off air and got in the car and remember saying to the guy who drives us home ‘it’s kicking off’ and I felt physically sick. I was sat the whole night, until three or four in the morning, in this daze. It was horrible. I got a lot of stick for coming off of it (Twitter). Then you’ve got people around you saying stand up to it, banter back and have a bit of fun with it. The bottom line was to look after my mental health first. That was my priority.

It was relentless. I can’t even describe it. People that know me know this is the job we do and choose to do it, but I’m low key, a simple girl who loves football. I don’t want to be bombarded on social media platforms. It wasn’t for one hour, it was for three or four days and now it still comes up, people still send me abuse. Recently I’ve been on a lot of government calls with the social media platforms – but they don’t understand. The people in charge of social media say ‘we’re doing this, doing that’ but they don’t understand, I’m just a number.

The only way I could make them understand was to say ‘do you want another Caroline Flack on your hands?’ Because that night that’s how I felt, and in that moment I could understand why she did what she did, because I could have gone to that place. It’s definitely changed me, the impact it’s had on me. I’ve seen it with other pundits, I’m not just speaking about myself.

About four years ago I got online abuse when I was playing, death and rape threats, leukaemia and things like that. When it happened at Christmas it was another trigger and I don’t think my mental health has been the same since. My behaviour has changed. I’ve been highly stressed and it wasn’t clear until (Chelsea manager) Emma Hayes rang and said ‘you’ve changed’.


If you are a Sports journalist, do you deserve to be targeted? Should someone this unstable be put in the firing line? Look at the Sports journalists on TalkSport. They get thousands of derogatory responses on social media every day! Why don't they complain? Should the fact that she is a female Sports journo mean that we should treat her differently? 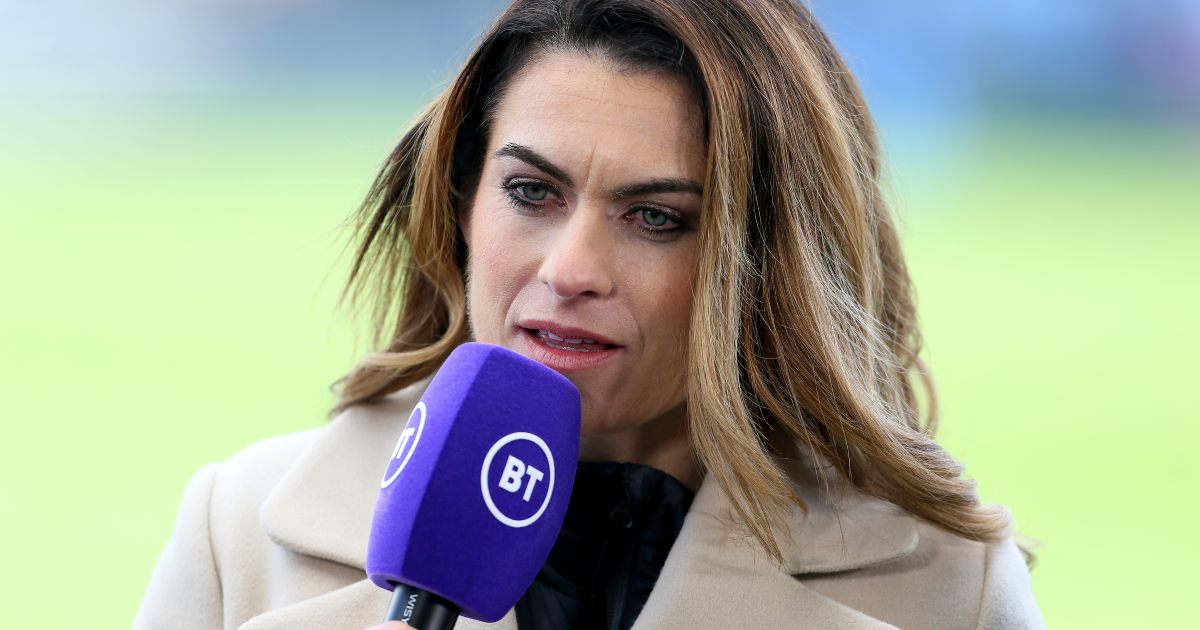 WhiteRose wrote: ↑Mon May 10, 2021 2:13 pm Carney clearly needs to accept that when your putting your opinions out to millions of people you are going to get opinions back, once you only had to worry about points of view (does that still exist?) Now everyone has a direct route to you.

Having said that there are parts of our fan base I have always struggled to connect with, im sorry if this offends but we all know the types, horrible, snarling and abusive sc*m who prefer the peripheral aspects of the game rather than the sport itself, her comments were like a red rag to a bull and the abuse she got was not deserved and I confess I was ashamed of it.

Perfectly put. She didn't deserve the dogs-abuse from a small subset of our fans for her comments, and that is the area of social media which is broken. If you couldn't say something face to face in a pub over a pint, don't say it.

However, she did deserve to be flagged by Andrea Radz for blatant mistruth. As a pundit she benefits financially from giving opinions and thus she is subject to fair criticism when she gets it wrong.

He does make exceedingly good cakes.

Do you enjoy Kipling?

I'm willing to stipulate that the British were, and perhaps are, less racist than the Americans within their own borders. Perhaps a little more so outside, at least historically. After all, it wasn't Whitman or Thoreau who encouraged the US to pick up the "white man's burden" and create an empire of its own.

Always loved a bit of Kipling myself. I do think racism here has become more vicious (whether or not it's increasing) because of this bleedthrough as I described, or rather it's taken on an American flavour, if you will. All the more reason for the difference between words of the lips and words of the fingertips to be more clearly identified and differentiated between. We lose no more liberty from having abusive and deliberately hateful speech quashed online than we do having our letters to a newspaper editor trimmed down.

It's certainly preferable to having the Old Bill come round your house for the sake of a Tweet, that's for sure.

mothbanquet wrote: ↑Mon May 10, 2021 2:29 pm A clumsy way of putting it for sure, I will totally hold my hands up on that. A better way of saying it (didn't really want to get drawn into the topic in a single post about something else but clearly it needed clarifying) is that experiences of racism and the specifics of it are vastly different depending on where you live. If you think racism - both the perpetuation of it and reaction to it - is the same for people born and bred in the UK as it is in the US then you're ignoring the past 200 years of history. A mixed-race MP was elected in Scotland long before the US Civil War. The first black man had the vote in Britain before the Declaration of Independence was even signed. While the Jim Crow laws were in full swing during WW2, the pubs of Bamber Bridge had signs up saying Black US Soldiers Only, such was the preference the Lancastrian locals had towards the polite and well-mannered black American soldiers over the blustering white ones.

Am I saying racism doesn't exist in the UK? Of course not. But the manner in which it's shown is completely different. To quote my wife, a black East-London daughter of Jamaican immigrants - the racism she's experienced in the UK is far more subtle (outside of social media), it's something that you can avoid entirely or of which you can be convinced is everywhere depending on where you are or how you've been raised. A relative of hers went out of his way to try and convince her as a girl that she will never get anywhere and everyone will always be against her because of her skin colour and it took a long time for her to realise that simply wasn't the case.

This is to be expected perhaps when she learned about the American Civil Rights movement in school and not the British-led crusade to abolish slavery and provide compensation through a national debt that was only paid off less than a decade ago. I even think this disparity has led to some - myself included - becoming disconnected from and underestimating just how prevalent an issue it is across the pond. Certainly the experiences of black American friends of ours (again, enormously different to those I've garnered from my extended family) has made me consider this.

So yes, I stand by the theory that social media has caused a cultural bleedthrough that brings with it America's own personal demons every bit as much as it brings all the positive things. It's inevitable when you're the main cultural influencer of your age.

Thank you for the thoughtful, reasoned response.

I'm willing to stipulate that the British were, and perhaps are, less racist than the Americans within their own borders. Perhaps a little more so outside, at least historically. After all, it wasn't Whitman or Thoreau who encouraged the US to pick up the "white man's burden" and create an empire of its own.