After sixteen years of hurt, a selective 8,000 lucky fans will be able to see their beloved Leeds United in the top flight of English football, albeit in the last game of the season. Their only saving grace is that, unlike their opponents, Whites fans will be able to see their team compete in the Premiership next season. Midweek wins for Arsenal and Everton have pushed the Whites back to 10th place. They are guaranteed to finish in the top half, even though Villa beat Spurs in North London last night, they are still four points behind. Leeds will have to beat already relegated West Brom, and hope that Citeh beat the Toffee's at home, and Brighton win at the Emirates if the Whites were to climb above them!

Pablo Hernandez and Gaetano Berardi will start in their final game for Leeds United, the lucky 8,000 fans giving them a send off of sorts, even if it is not the one they deserve after 5 and 7 years if loyal service. Berardi will start longside Liam Cooper as Diego Llorente picked up an injury in the week. Kiko Casilla will remain between the sticks for the final game of the season. Pablo Hernandez will start in the attacking midfield role with Stuart Dallas and Kalvin Phillips making up the central midfield roles. Jack Harrison and Raphinha will torment the West Brom full backs whilst Rodrigo will start up front in favour of Patrick Bamford. This could also be Gjanni Alioski's last game for Leeds as his contract runs out this summer.


Departing West Brom iis still without Branislav Ivanović with a hamstring injury and Robert Snodgrass with a back injury. There are two changes for West Brom from their 3-1 defeat to West Ham with Dara O'Shea and Callum Robinson coming into the side.

Last time out Leeds were 5-0 victors with goals from Alioski, Harrison, Rodrigo and Raphinha. Leeds scored four goals in a rampant first-half display at The Hawthorns, but were gifted the opening goal when home midfielder Romaine Sawyers bizarrely passed into his own net from 25 yards. From that point Leeds utterly dominated. Ezgjan Alioski's crisp drive and Jack Harrison's thumping close-range finish left Albion trailing 3-0, while worryingly devoid of ideas and confidence. Rodrigo's deflected shot put Leeds 4-0 ahead before half-time - but there was no let up for the hosts after the break. Another swift attack ended in Brazilian winger Raphinha cutting inside from the right and curling beautifully into the top corner for the fifth.

In scoring 59 league goals this season, Leeds United have now broken the record for the most goals scored by a newly promoted side in the Premier League in a 38 game season. A win today will see Leeds on 59 points, the most by a promoted side since Ipswich Town in 2000/2001. 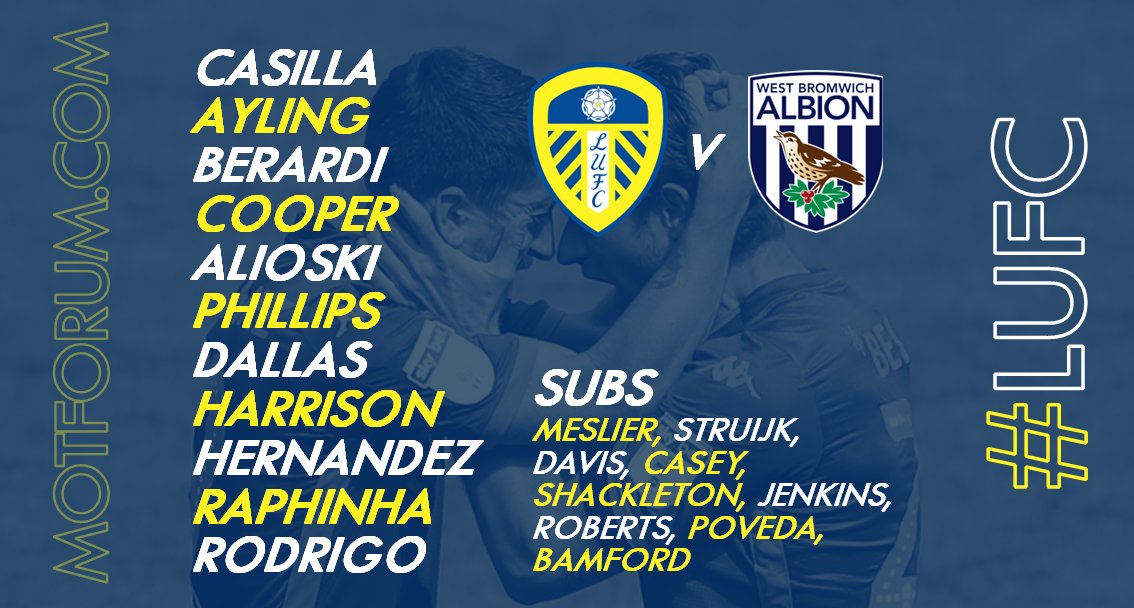 Enjoyed that second time around.

Raphinha is so quick when you see him live, hadn't realise he wears his shorts rolled up, short like footballers use to wear many moons ago

Sad day for Pablo & Gaetano, some wonderful play from Hernandez....pass of the day to Dallas in the 1st half, shame the penalty didn't occur whilst he was still on the pitch.

Alioski had another fine game

A mare 3 minutes for Kalvin, otherwise he had a very good game.

KP missing out on the Euros....

I'd love him to go. It would make him a better player.
Same as will any of the rest who go.

mothbanquet wrote: ↑Mon May 24, 2021 9:42 am Had the Fulham v Newcastle game on at the same time, you could hear a pin drop there. Different situations I know but surely after not being able to attend for so long you'd make the most of the occasion?

The atmosphere & chants sounds louder on the telly, maybe I'm use to 36,000 crowds at ER when the noise makes the hairs on your back stand up.

mothbanquet wrote: ↑Mon May 24, 2021 9:23 am Clearly motivated by his mistake that let West Brom get their consolation. He's a smart lad though and still young, I'm sure he'll learn from that and no doubt Bielsa will do his bit to ensure he does.

In the meantime am I the only one who thinks that with plenty of time to recover till pre-season starts, it may end up being a blessing in disguise? Not keen on the Euros going ahead as is given the current situations and he may well have picked up an even worse injury during the competition. Pure conjecture I know, but still.

Had the Fulham v Newcastle game on at the same time, you could hear a pin drop there. Different situations I know but surely after not being able to attend for so long you'd make the most of the occasion?