The last 18 months have been devastating for the Leeds United family as we have had to say goodbye to several legends of the club. It’s incredible sad then to learn that yet another of the great Revie side has been lost with the passing of Terry (Top Cat) Cooper at the age of 77.

Born in Brotherton near Castleford, Cooper was playing for Ferrybridge Amateurs when he joined Leeds as an apprentice in May 1961, turning professional in July 1962. He joined Leeds as a left-winger but despite good ball control he had insufficient speed to shrug off the constant close attentions of defenders. He made a surprise debut on the day Leeds gained promotion from the Second Division in 1964, but during the next four seasons, Cooper made spasmodic first team appearances and grew increasingly frustrated with his progress. Don Revie was about to let Cooper go to Blackburn Rovers for just £25,000 but fortunately the Ewood Park club considered even that modest fee excessive.

A solution was found, as Cooper took over the left back role from Willie Bell in the 1967-68 season and in that position he had the advantage of facing play. As a defensive left-back, he had imperfections, as his lack of pace left him vulnerable when being attacked, and sometimes left him dependent on Norman Hunter for extra cover. Despite this flaw, his attacking instincts never left him and his skill was always apparent along with a shrewd football brain and within three years of becoming a regular, Cooper was playing in the World Cup finals in Mexico and being spoken of as the best left-back in the world.

With his superbly timed and struck passes down the left for Eddie Gray a joy to behold but Terry Cooper was never happier than when overlapping and crossing balls into the penalty area causing panic in defences throughout the world. Unfortunately his career saw the highs and the lows. His goals were relatively rare, but he scored against Arsenal in the 1968 League Cup Final at Wembley to give Leeds its first major trophy. He was a vital member of the Leeds team that won the Inter-Cities Fairs Cup in 1968, the First Division Championship in 1968-69 and followed it up by again lifting the Inter-Cities Fairs Cup in 1971. 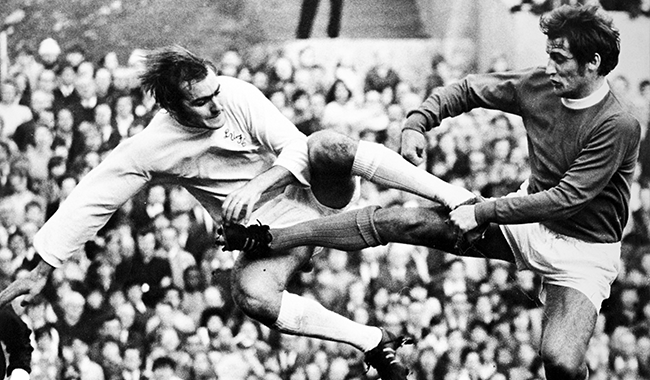 On 17th May 1967 he played for England against Young England at Highbury in a prelude to his attaining his first England cap, as England were looking to replace the ageing Ray Wilson. He made his debut in a 5-0 hammering of the French at Wembley on 12th March 1969. He was an instant success and continued to figure prominently and beat off the challenge from Emlyn Hughes and Keith Newton for the number three jersey. He was an ever-present for England in the 1970 World Cup and was generally acknowledged as being the best left-back on view in the competition

Cooper's emergence, as much as anything, had helped Leeds to shed their image as a dour side but unfortunately, he would break his leg in April 1972. His recovery had taken far longer than anticipated, out for nearly two years in total, robbing him of an FA Cup winners medal and some of the best years of his career. After his return to first team football in January 1974, Cooper made just 17 more appearances in all competitions for Leeds before a move to Middlesbrough for £50,000 in March 1975. Cooper made a total of 351 appearances for the Leeds, scoring 11 goals

He would leave Boro to join Bristol City in July 1978 where he made 11 appearances before crossing the city to became Player-Coach at Bristol Rovers in August 1979. He was there almost three years and made fifty-nine League appearances before he assisted Billy Bremner at Doncaster Rovers for a brief spell and played twenty games for the club. In May 1982 he returned to Bristol City as Player-Manager and became Britain’s first Player-Director. He played a further sixty League game, scoring once. After retiring as a player in 1984, he helped bail City out of dire financial trouble and steered them to victory in the 1986 Freight/Rover Trophy, but his failure to push City into the Division Three promotion frame saw him axed and replaced by his assistant Joe Jordan in March 1988.

He was appointed Exeter City Manager in May 1988 and took them to the Fourth Division title in 1989-90. That success saw him appointed Manager of Birmingham City in August 1991. His first season at St Andrew's saw them gain promotion from the Third Division in 1991-92 as runners-up to Brentford. He also became a Director but left in November 1993 and re-joined Exeter City as Manager in January 1994 before he quit in June 1995 due to ill-health.

There's a red headed tiger known as Billy
And he goes like a human dynamo
Mick the Mover of course, he can work like a horse
And Top Cat Cooper's always on the go