Good Morning. It's Monday 15th November, and here are the latest headlines from Elland Road...

Multiple media sources are reporting that Leeds are lining up a bid for Reading midfielder John Swift. The 26 year old has had an electric start to the season with the Royals, finding the back of the net on eight accessions, as well as seven assists! He has also featured in all 17 league games this term, a far cry from his 14 last season due to injury. Wolves and Burnley are also interested in the former Chelsea youngster.

Media reports have suggested that Victor Orta has made recent contact with Eddie Nketiah regarding a move to West Yorkshire in January. The 22 year old has become surplus to requirements at the Emirates after refusing to sign a new deal at the North London club. Instead of waiting until next Summer when multiple clubs will be scrambling for his signature, the Leeds Director of Football wants to strike first whilst the iron is hot.

Crystal Palace has a bid accepted in the region of £12m, but Nketiah could not agree personal terms with Patrick Viera. Currently, Leeds have one (goal scoring) striker in the first XI, but with the emergence of Joe Gelhardt, they could soon have further options up front! Would £8-10m be a bargain for Nketiah? 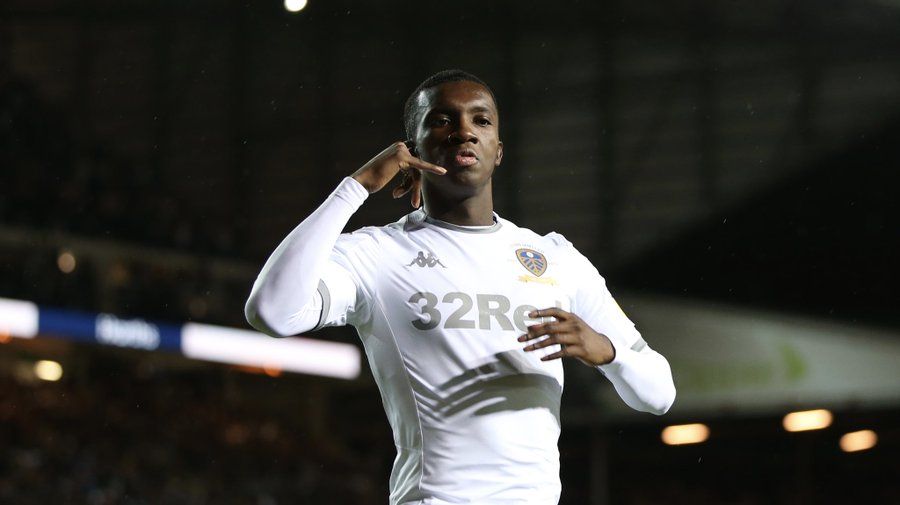 Social media lit up over the weekend when Ezgjan Alioski posted a picture of himself with Illan Meslier. The French U21 shot-stopper is preparing to take on North Macedonia's U21's on Tuesday evening, whilst 'the Duracell bunny helped his senior side (and also opened the scoring) to a 3-1 win over Iceland.

Alioski left Elland Road in the Summer, to sign a lucrative deal with Saudi outfit Al-Ahli. Whilst he was not blessed with the same kind of skill-set as Raphinha; his heart, determination, and ability to cover every blade of grass meant that the mischievous 29yo got plenty of game time during his four years at Elland Road. 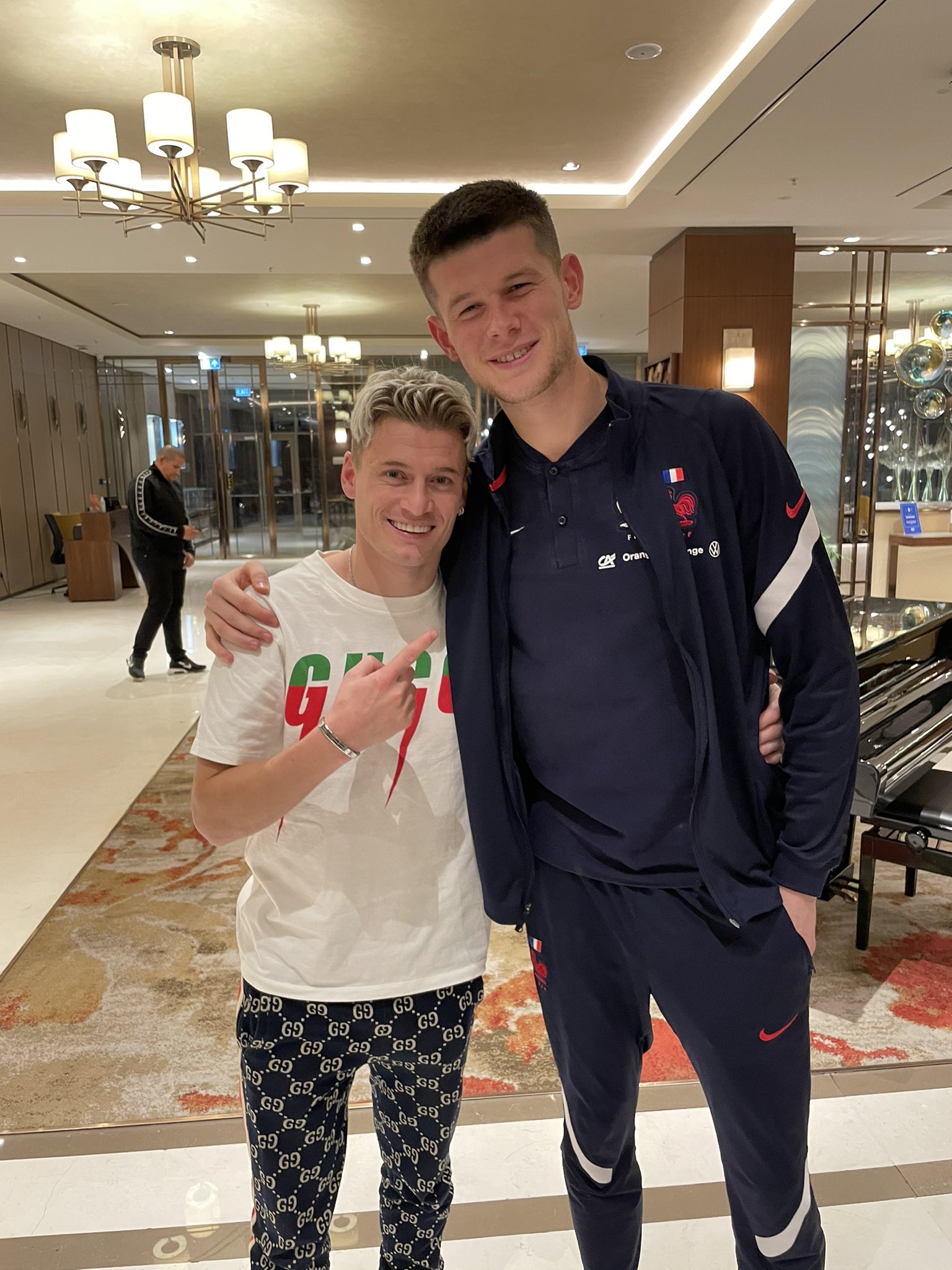 The squad at Elland Road has time on its side

There's an interesting piece in 'The Athletic' this morning written by Specialist Data Analyst Mark Carew and Phil Hay regarding at what age and position football players reach their peak, and then comparing it to Leeds, and their exploits this season!

Leeds have a small crop of first-team regulars who are in their 30s and slightly beyond what football would class as their peak, but the majority are below that point and some, such as Kalvin Phillips and Patrick Bamford, are right in the zone where Leeds should be getting most out of them. If the younger crop is as good as Leeds think it is, Bielsa has a good hand to work with and his successor stands to inherit plenty of players on the rise.

In The Athletic’s framework of when footballers peak in their careers, the analysis found that goalkeepers peak at 28, centre-backs at 27, full-backs and central midfielders at 25, wingers and attacking midfielders at 26 and strikers at 27. That correlation can be seen in Phillips and Bamford, both of whom have made the England squad right at the point of peak age.

The data provides some context for the state of the squad at Leeds and guidance for managing it in forthcoming transfer windows. The graphic is a breakdown of the ages of each of Bielsa’s players showing where they fall in relation to the stage when their impact should peak". "Looking at the results, the club have a good number of names either in the red “peak” zone or to the left of it, a sign of how reluctant they are to pay for players who have already come through the development phase.

Raphinha could yet to be at his peak, which is one reason, beyond his obvious talent, that he would appeal to elite European teams. Illan Meslier, too, is 21 and a long way off his maximum value, putting him in the list of players who Leeds can expect to see improvement in. Several others are already Premier League regulars or have been blooded in the division: Jack Harrison, Daniel James, Pascal Struijk and Robin Koch. 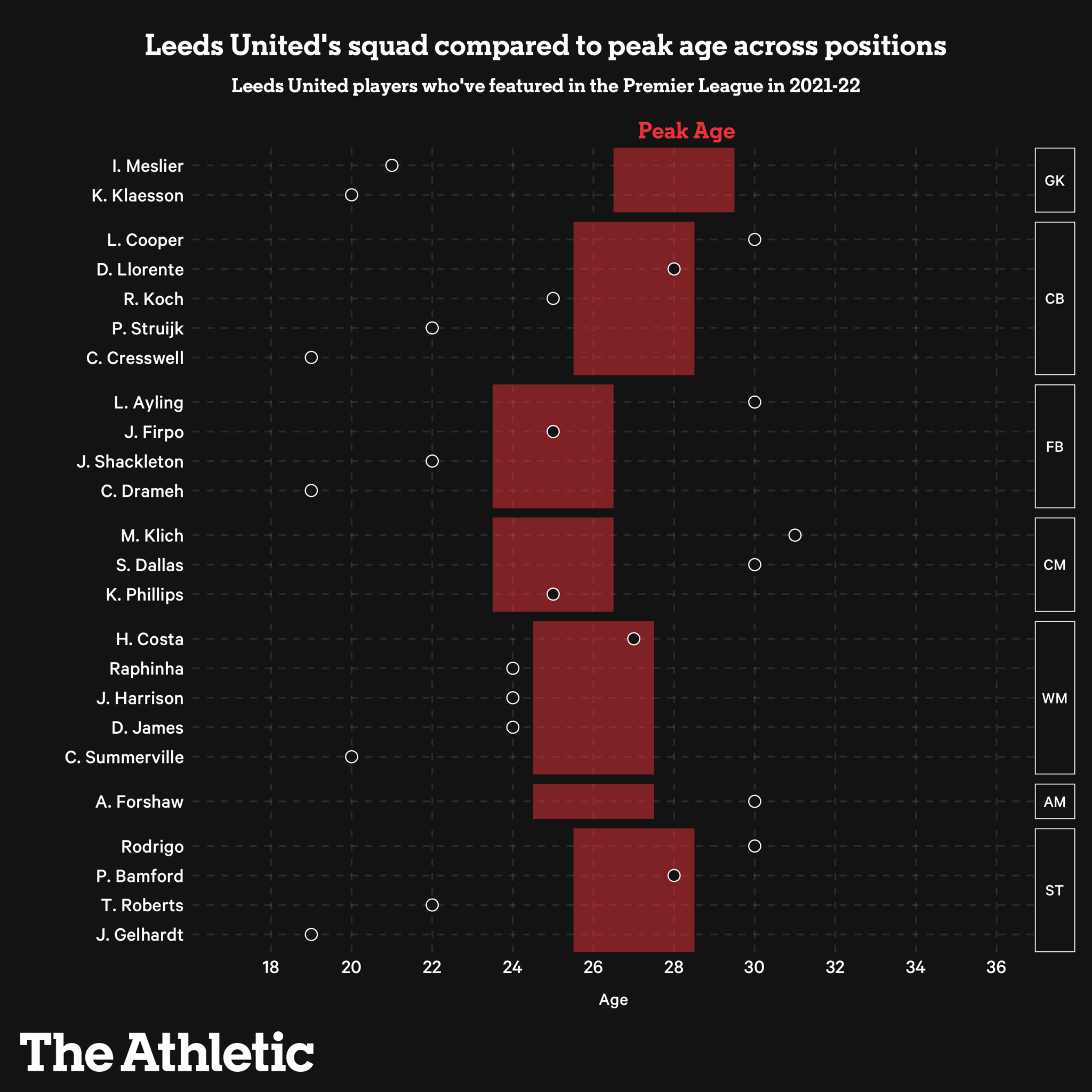 But no basis for reasonable analysis

Used to work for The Athletic but his work in the analysis and statistical field of football and football recruitment impressed so much that he left to join RB Leipzig who are universally admired in football for their work in that field.

Definitely not a moron.

DDB220 wrote: ↑Mon Nov 15, 2021 5:55 pm Personally I would have taken Charlie Taylor back. His game would suit our style and he would flourish under Bielsa.

I do not know a great deal about Swift but it sounds like he would be a good addition - however, if he has fitness concerns then they will be exposed under the MB training regime.

Nketiah is essentially a poacher and is sharp in the box. We could do with that type of player when we are on top in a game or chasing a goal when the opposition is camped in their own half defending a 1 goal lead, or holding on for a point. A player with his sharpness in the six yard box is something we do not have.
He showed that in the Championship by scoring goals under those conditions. However, I would not consider him a starter and as such doubt he would want to join without assurances about his playing/squad status.

We miss Alioski because our supposed upgrade is anything but currently. Jury is still out on Firpo. Ironic that if Alioski had accepted the contract offered he would have played a lot of games this season. But he clearly felt he could achieve better terms elsewhere. Personally I would have taken Charlie Taylor back. His game would suit our style and he would flourish under Bielsa.

Lets hope so we dally around too often.

Does tha know what. I have changed my mind about this kid at the reported £12m. Imo he would be the most natural finisher on our books and it would be another option up top. In saying that he won't come, his next move he will want to know he's got the best chance of playing regular. He needs to be playing regularly to get the best out of himself. Newcastle may take a punt on the kid?

He offered better balance down the left with Harrison because they had played together for a few seasons. Firpo should....? turn out to be a better defender imo. Will he be as potent in attack? I'm not sure.