Leeds face a torrid trip down to the South Coast to face Brighton and Hove Albion on Saturday, desperate to claw their way from the drop zone. Their plight is not made any easier after it was confirmed that Patrick Bamford will yet again miss the action. The 28yo has been sidelined for over two months with an ankle ligament injury. Although he has returned to training this week, he gave the medical team a big scare when he went over on his ankle; fortunately, no damage was done. Journalist Beren Cross expects Bamford to play at last a couple of games for the U23's before he regains his rightful place, spearheading the attack for the first XI.

It's better news for leading scorer Raphinha. Having missed the Spurs game through illness, the Brazilian International has returned to training, and will start against the Seagulls. Firpo too is available and starts at left back. The former Barcelona left back was less than impressive during his 30 minute cameo role last weekend; let's hope he was just brushing the cobwebs off. Rodrigo's chances of starting were rated as 50/50 having picked up a minor foot injury prior to the Spurs game. But the Spanish international will start up front.

During a recent interview Bielsa stated that Luke Ayling's comeback is being assessed on a day to day basis. We can therefore rule him out of action. His deputy Jamie Shackleton joins him on the sidelines, although there is footage of the 22yo light training earlier this week. Stuart Dallas will fill in at right back yet again. Long term absentee Robin Koch remains on the treatment table. 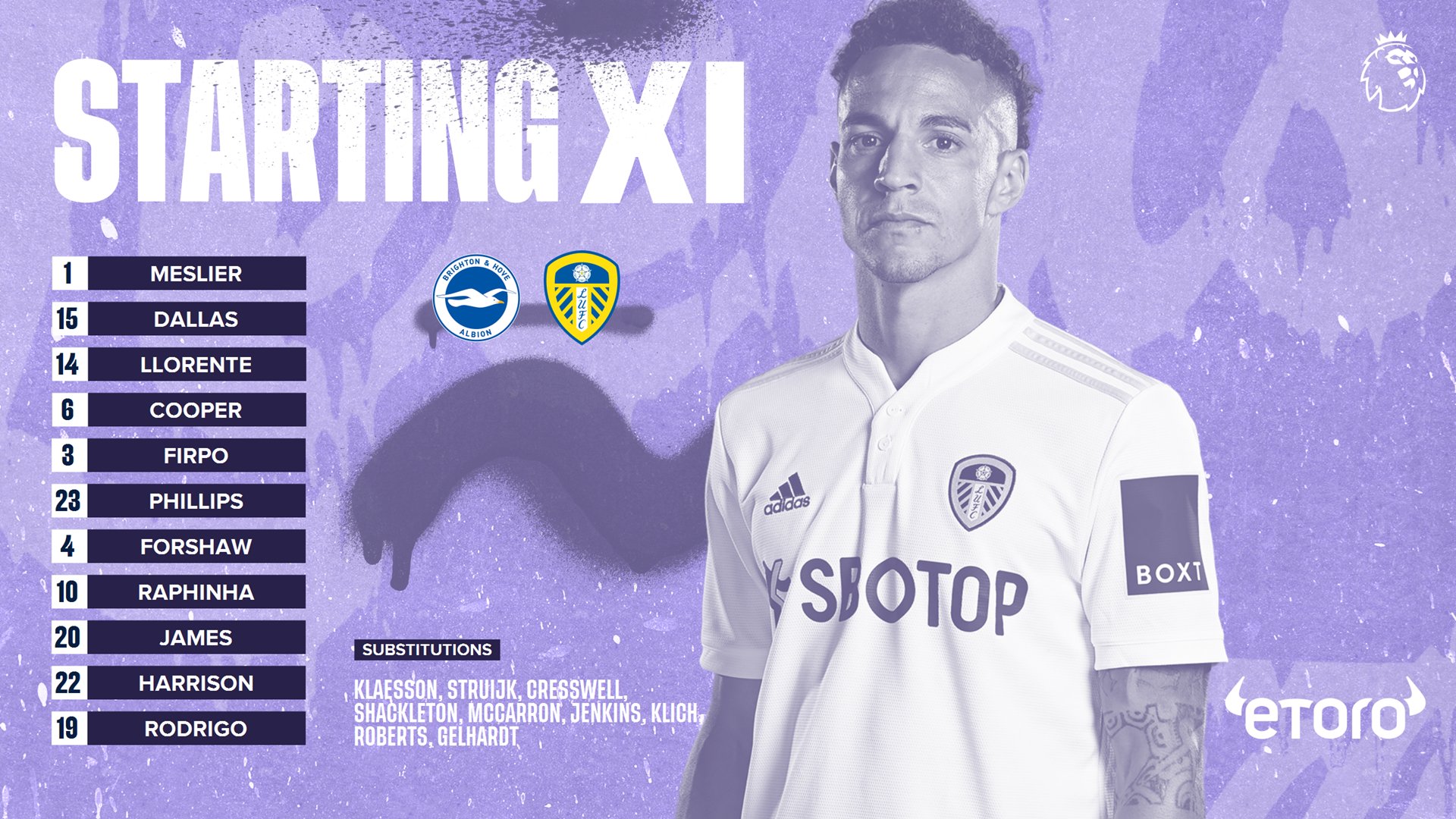 Brighton were one of the few teams to do the double over Bielsa's side last season. For whatever reason Leeds simply didn't play well against Graham Potters side. After a strong start to their campaign this term, they have slipped down to 9th in the table, having not won in the league in the last seven attempts.

The hosts we be without midfielder Steven Alzate (having undergone surgery for a troublesome ankle injury) and Danny Welbeck (Hamstring). Enock Mwepu could return for the Seagulls after overcoming a muscle strain. Shot stopper Robert Sanchez returns to action after being sent off against Newcastle.

Struijk had a great game against a strong Spurs team playing as a LWB, we were more solid when Pascal came on yesterday, he should be an automatic starter imo!

I don't want to see Firpo in a Leeds shirt again until he is fully-fit & learns how to defend efficiently, stick him in the U23's for a while, if he gets the runaround by the opposition kids we'll soon realise he's not up to PL standard. His performance was embarrassing yesterday.

They would if they had to play up as a lone striker the way we play.

Don’t get me wrong, I’m still not convinced by Firpo defensively, but against pace as our specialist LB he SHOULD be better than Struijk, it’s obvious.
I too thought Struijk fitted in well against Spurs and I’d prefer him or Dallas to Firpo but Spurs didn’t attack us the same apart from the 15 minute spell when they got their two fortunate goals.
Im trying to offer logical explanations without trying to be an expert

Loved our time with Bielsa but things seem to be turning sour.

Thinking back to the Norwich game I noticed the body language when they were in the tunnel. Quite a few players had that faraway, vacant stare and to me there seemed to be a lack of enthusiasm.

I can’t fathom the exact reasons but something is not right.

For us I mean, not the opposition

White Riot wrote: As silly as James, or Harrison, at number 9?

mentalcase wrote: ↑Sun Nov 28, 2021 1:29 pm Lamptey is mega fast , therefore I would have had James coming back to help protect with Firpo not lazy Harrison, you telling me a kid of 19 can't lake twice a week !!!

I rated Lamptey last season, he has suffered a couple of serious injuries since

Our oil tanker of a defence struggles to cope with players who run at them with pace, yes Lamptey is lightening fast, however defenders need to stick close to him, not daydream & allow him to have first run on them.

Many kids in the PL & across Europe play twice a week, it's a ridiculous notion to suggest they can't.

I reckon Joe would be really p*ssed off watching our lazy Spanish international ambling around, producing nothing of note & a winger showing how not to play the No.9 role.