Leeds will still be licking their wounds as they prepare for the visit of Mikel Arteta's Arsenal on Saturday afternoon. Back to back defeats against Chelsea and Manchester City have hampered the Whites efforts to create distance between themselves and the bottom three. They currently find themselves five points clear, and two places above 18th place Burnley who have two games in hand over the Whites. They also have a superior goal difference, by eight.

Their quest for points will not have been made any easier as their absentee list has grown throughout the week, an ankle injury to Jamie Shackleton (who hobbled off midway through the first half mauling at the Etihad), Charlie Cresswell getting injured in training injury to Dan James and Diego Llorente isolating has compounded Bielsa's selection dilemna. Kalvin Phillips and Liam Cooper are long term absentees, whilst Rodrigo, Bamford and Struijk are thought to be on the mend, but unlikely to return to action this weekend. Junior Firpo also picked up his fifth booking of this campaign and will be suspended. 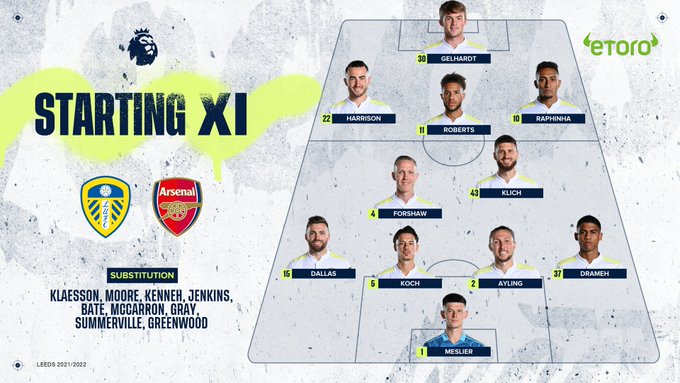 Robin Koch is fit enough to start alongside Luke Ayling. whilst Cody Drameh will start at right back with Stuart Dallas at left back. Fellow youngster Joe Gelhardt starts up front with Tyler Roberts behind. Adam Forshaw and Mateusz Klich complete the centre of midfield with Jack Harrison and Raphinha on the wings.

Arsenal are in fine form, having recorded back to back wins against Southampton and West Ham, and keeping a clean sheet in the process. Aubameyang (disciplinary issues) and Kolasinac (ankle) have been ruled out. Shot stopper Bernd Leno and Emile Smith Rowe will both face late fitness tests after respective groin injuries! Granit Xhaka is fit after overcoming a recent knee ligament injury.

Find live TV coverage of the game. Need a VPN?

I was fortunate enough to not have watched the match last night and can’t bring myself to watch any “highlights”, so I won’t be critiquing the game, rating the players etc.

Suffice to say not many of us expected a win against our last 3 opponents nor our next one for that matter, although before the start of this 7 game run, starting with Chelski, I did fancy a perhaps a draw against Arsenal at home. But the manner and scale of the defeats have been totally unexpected (even notwithstanding our injury crisis) and I fear another heavy one against Liverpool, by which time any confidence the team had will be absolutely shot and that may well lead to a defeat even against Burnley.

I’ve stated previously that I’m now ambivalent as to whether we stay up or get relegated as no matter what happens we will need a complete overhaul and rebuild of the team in the Summer and that may more easily be done at Championship level.

We have the best fans in the country and they really do deserve more!

rab_rant wrote: ↑Sat Dec 18, 2021 7:50 pm For all the condemnation of Beilsa on here the crowd seemed to be chanting his name for at least the last ten minutes.

what would it take to silence them?
What faith do they have that is not evident on here?

Liverpool is forgone conclusion and Villa are more than capable of putting a few past us and unfortunately so are Burnley we are just so easy to play against. Bielsa needs to adapt this ridiculous marking system. Each week we hear from managers and commentators about how the Leeds system is unique and a different challenge for teams well they Seem to know how to manipulate our defence to make space - they will work on it all week in training probably whilst having a good laugh. If we change it up it will surprise teams and force them to adapt.

I don’t get how he can come out week after week and take the blame for bad tactics and yet just play the exact same way the next game, can do man marking but has to be in the right situations and defenders have to ask themselves should I be breaking the shape chasing this player who clearly wants me to follow him.

Is Jack Jenkins the new Robbie Gotts lol? Just always warming the bench and never gets a run out.

Rest Raph and Gelhardt for the Scousers and take the beating. Leave them fresh for Villa and Burnley.