Leeds kick-off the New Year with a home match against bitter rivals Burnley on Sunday lunchtime. The game itself will be about a lot more than just local bragging rights, with both sides battling for Premier League survival. Leeds are five points and two places better off than their Lancashire foes, but have played two games more. Sean Dyche's team have lost two fewer matches, and have an eleven goal better goal difference.

Marcelo Bielsa confirmed in his Friday press conference that Firpo, James, Llorente, Koch and Harrison are all available for selection for Leeds on Sunday. Bamford is fit and healthy but has not played for 4 weeks which puts doubt in him playing. Bielsa has the luxury of two fit recognised centre backs with Llorente and Koch in a back four alongside Ayling and Firpo. Burnley's superior aerial threat will be a test today, on average, Burnley win 24.7 aerial duels every game, far superior to any other top flight club. Leeds aerial threats are far less effective (12.2 per game) placing them in 19th position. Unfortunately for the Whites, their best headerer's (Cooper and Cresswell) are both injured. 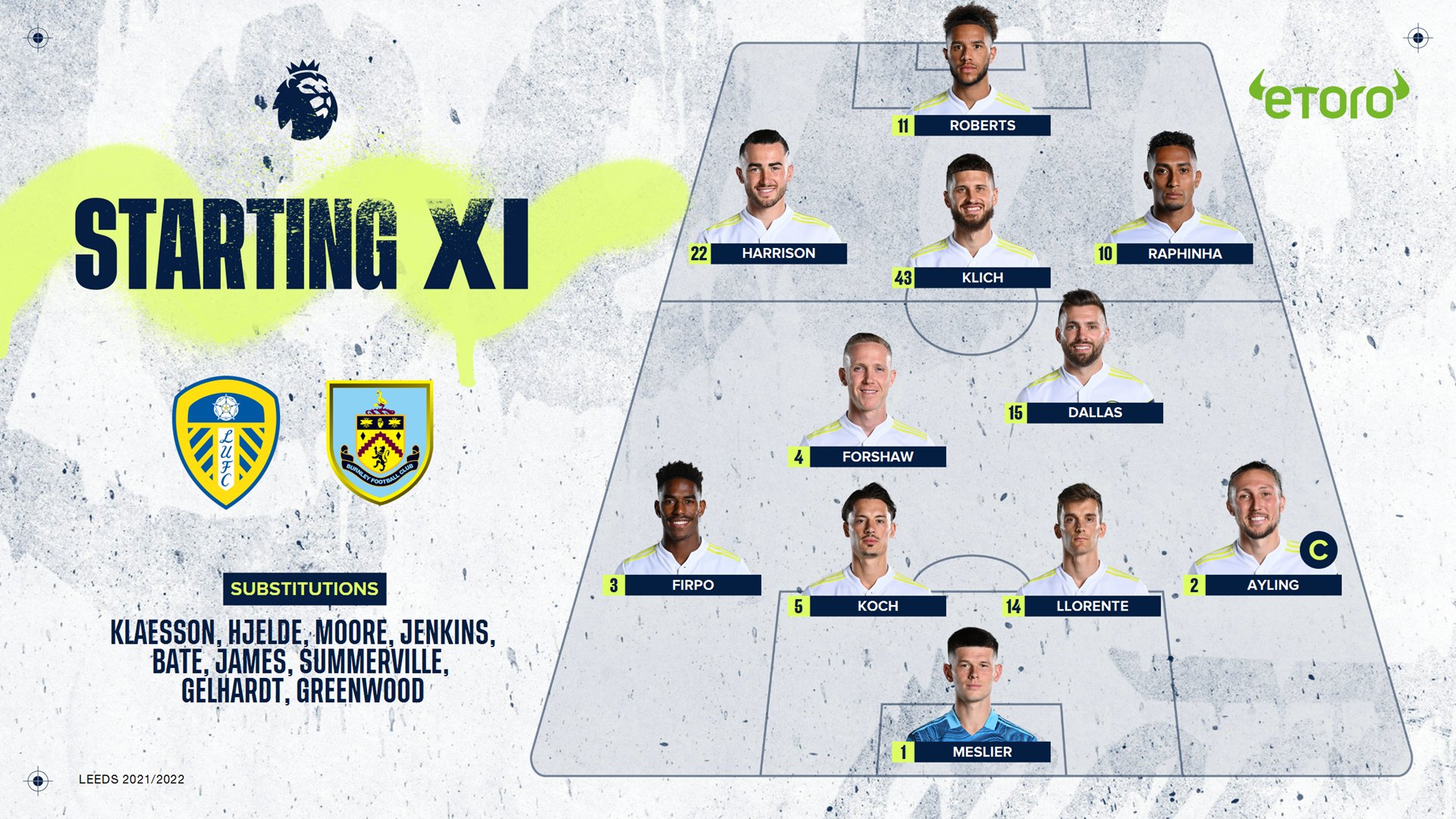 Burnley have been hit with a quadruple positive Coronavirus test blow ahead of Sunday's trip to Elland Road. Nick Pope, Jay Rodriguez, Josh Brownhill and Kevin Long have all tested positive for the virus meaning they will need to self-isolate for at least seven days. They join Maxwel Cornet, Ashley Barnes and Connor Roberts on the sidelines, meaning Burnley have seven players out. The news was confirmed by boss Sean Dyche ahead of the kick-off of their game the other night against Manchester United. Burnley lost 3-1 at Old Trafford, with all the goals coming in the first half. The absence of England keeper Nick Pope was meant only a second Premier League appearance since lockdown for keeper Wayne Hennessey who produced a couple of eye-catching saves.

Given the opposition Dyche may not be too dispirited by the outcome but Sunday's trip to Elland Road is far more significant in the wider scheme of things. Whilst Leeds are just getting over their Covid issues one more positive case in the Burnley camp could see Sunday’s game in jeorpady. Leeds did the double over Burnley last season with 1-0 and 4-0 wins but the points were shared in a 1-1 draw earlier this season when Patrick Bamford's late equaliser pintched a point in a feisty Premier League affair at Turf Moor. Leeds will be looking to take all 3 points on Sunday to give them more breathing space over the bottom three.

I did say on another thread, Burnley were one of the poorest teams I've seen in the PL this season.

rab_rant wrote: ↑Sun Jan 02, 2022 7:26 pm I counted 25 attacks in the box before Harrison scored his goal.
When gets condensed down to just those movements it gives hope that we are creating chances.
There was a time this season that we created very little in the box.
I hope this is a turning point. If we continue to be positive like today,there is a chance to pull away from the relegation zone.

Yeah, we finally seemed to have a creative spark as a team, rather than just giving the ball to Raphinha and hoping he can work miracles on his own.

I'm guessing those are our best attacking stats of the season?
So no surprise we scored three goals, but should have scored a few more, the Roberts and Raphinha misses were painful to watch.

Cjay wrote: ↑Sun Jan 02, 2022 9:04 pm Interesting you mention this because Junior Firpo has only really had 1 season as a first choice player.

In 2018/2019 as a wing back for Real Betis under future Barcelona manager Quique Setién.

He always played a back 3 and Firpo never was considered a great defender but as a wing back with a back 3 behind you you don't have to be necessarily.

Story with Firpo here is that Bielsa didn't want any of Orta's list, he wasn't convinced by any and instead wanted them to convince Ali to stay.

When that didn't happen he selected Firpo as the least worst, I suspect that may be true as multiple people have said it

Had a good game today though, twas a start.

Fair points, but I thought MB usually only goes with a back three if the opposition have two playing up top?

Thought Firpo did very well and is gaining confidence.

Koch and Llorente gave us a solid base, Koch handled the aerial threat and physicality of Wood very well

1964white wrote: ↑Sun Jan 02, 2022 8:20 pm After a cagey start with both teams losing possession through sloppy passing, we settled down & dominated the first-half with lots of flowing moves with only the final ball & some poor finishing keeping the score down at half-time, we should have led 3-0 at the very least.

The first quarter of the second-half was the worse period of the game, as Burnley were camped in our half. Unsure if it was a foul from Llorente for the free-kick given but, my fears came true as their £20m signing substitute Cornet curled a beauty beyond the reach of Meslier hands with virtually his first kick of the game

It was beginning feel like it be one of those games where we had dominated so much of the match & we may have to cling on for a point. Gelhardt & James entered the fray within minutes of each other & we seem to find our rhythm once again. Step up STUART DALLAS who runs with the ball & hits a superlative shot with his left peg which was in the net as soon as the ball left his foot

Some terrible finishing from Roberts & Raphinha, however both were involved & made their presence felt in other areas of the pitch.

I thought Burnley were awful, but you can only beat the team put in front of you.

Well stated Leon, we finally look like a team again

Was he referring to team effort or the one that came in from the crowd?