Can Mateo Joseph save U23's from the drop


Good Morning. It's Wednesday 5th January, and here are the latest headlines from Elland Road...


Can Mateo Joseph save U23's from the drop

Leeds have completed the signing of teenage striking sensation Mateo Joseph Fernandez from Espanyol. Victor Orta's persistence finally paid off as he signed a three and a half year deal last night. He will add much needed firepower up front for the U23's as they look to secure their top flight status in Premier League Two.

Mark Jackson's side have slipped to 13th (out of 14) after a promising start to their campaign. It is hoped the 18 year old will be an adequate replacement for Gelhardt whose first team career is starting to blossom. Joseph netted 44 goals in 56 games at developmental level. Last season, he bagged 14 goals in 21 matches for Espanyol’s Under-19s. Have Leeds overestimated their young talent? If they are not strong enough for Premier League two, what hope do most of them have of breaking into the first team?

Labour MP Chris Evans is calling on the FA to issue an official apology to Don Revie’s family for their vindictive treatment of the late Leeds legend during the latter parts of his illustrious Managerial career. Having failed to qualify for the 1978 World Cup, Revie quit as England boss, to take a similar role in Dubai as head coach of the United Arab Emirates.

Incensed by Revie's actions, the FA charged him with 'bringing the game into disrepute', and issued a ten-year ban from managing in English football, which Revie managed to get overturned in the High Court. Evans, the Shadow Minister For Defence Procurement, has written to FA chairman Peter McCormick urging him to issue a posthumous pardon. In his letter, the MP for the Islwyn constituency wrote...

Despite simply doing what so many other people do every day, resign from a job to take employment elsewhere, the FA under the leadership of (Professor) Sir Harold Thompson charged Mr Revie with bringing the game into disrepute. There is evidence that the FA did everything (they could) to discredit him. Such as writing to the then 92 League clubs to remind them of the ban.

They also attempted to obstruct Liverpool, the 1977 European Cup Winners, from (playing) a friendly in the Emirates simply because Mr Revie was working there. Mr Revie passed away after a brave fight against motor-neurone disease (but) not before being subjected to appalling, baseless accusations of dishonesty. It is my sincere hope the FA will look to issue an apology. Cornet was asking for trouble - Robbo

Former Leeds and England shot stopper Paul Robinson has accused Burnley's Maxwel Cornet of 'asking for trouble' for his second half antics at the weekend. The Ivory Coast International was on target for the Clarets with a spectacular free kick, and rubbed salt into the wounds by celebrating right in front of the Leeds fans. A plastic bottle was thrown from the crowd in the direction of the opposition players. It hit Matt Lowton on the head, causing a bruise. Fortunately, the defender didn't make a meal out of it. According to Robbo...

There’s no excuse for throwing a bottle but you know where your fans are in the ground. You wouldn’t necessarily go in front of home fans and taunt them, which we’ve seen twice recently. Rodri did it for Man City in front of Arsenal fans; that was uncalled-for, and I don’t think Maxwel Cornet’s celebration helped the situation.

There’s no excuse whatsoever for throwing anything onto a football pitch, you shouldn’t do it and whoever did it should be banned and dealt with accordingly. “But I think the players should know where they should and where they shouldn’t celebrate. When you’re playing in such a hostile atmosphere, you’re asking for trouble. It shouldn’t happen but you know where your own fans are so go and celebrate with them. 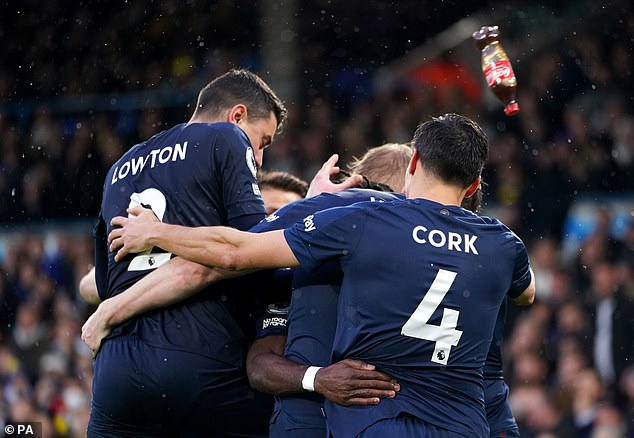 Don't even get me started on the debacle, injustice, cheating, corrupt game in 75....that should be looked into and B.M. stripped of a gold star above the badge on their shirts! Makes me so angry.

Obviously young Fernandez has been signed to offer Max Dean some competition, meaning Joffy is seen as a first-team impact sub going forward when Paddy's back.

I know he only signed last night, so I suppose a few minutes tonight is unlikely?

I see the club are working with the police to find the bottle-thrower, hopefully the threat of court on top of a life ban will be sufficient to deter others from shaming Leeds in future.

Looks good business for Newcastle on the surface, depends if Trippier has come to play or collect a big pay check.

Newcastle have agreed a fee of around £12 million with Atletico Madrid for Kieran Trippier - Good business?