Good Morning. It's Monday 10th January, and here are the latest headlines from Elland Road...

Leeds were knocked out of the FA Cup in controversial circumstances by West Ham yesterday, at the London Stadium in front of 8000 travelling fans. Bielsa's handed debut's for Lewis Bate and Leo Hjelde, whilst in the absence of Bamford, Roberts, Rodrigo and Gelhardt, Sam Greenwood led the line. Although on paper, it looked like it was going to be a one-sided affair, the Leeds starlets frustrated the Hammers, providing stubborn resistance from a well-organised and balanced team.

West Ham took the lead with ten minutes of the first half remaining. Vlasic outmuscled Hjelde on the edge of the box, turned his man, and ran in on goal. Hjelde redeemed himself with a last gasp challenge which any top flight defender would have been proud of. Meslier went to smother the ball, but was thwarted by the onrushing arrival of Bowen. The ball broke kindly for Lanzini, who fired David Moyes team to a 1-0 lead at the break. Bowen was in an offside position when he ran across Meslier. Whether he actually touched the ball is irrelevant, he influenced the play, and the goal should not have stood.

Leeds continued to frustrate the Hammers in the second half, but were undone deep into injury time when Antonio broke free, as Leeds piled forward searching for an equaliser. His diagonal pass found Bowen on the edge of the Leeds area, who thumped the ball past the despairing dive from Meslier. 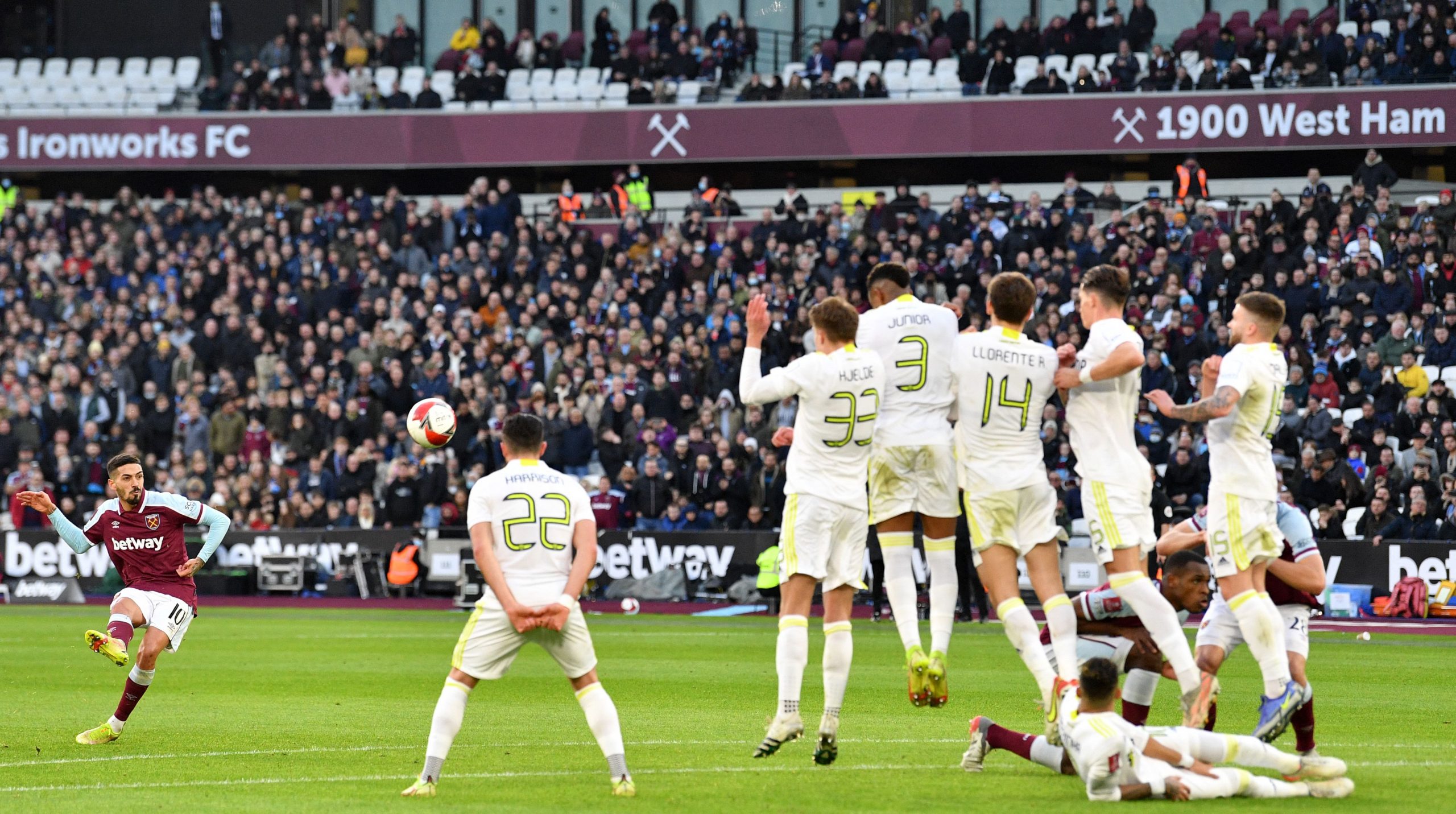 Another setback for Bamford

In his post match press conference, Marcelo Bielsa disclosed that Patrick Bamford injured himself again in training earlier this week. The Leeds No 9 was due to lead the line against West Ham but has picked up an as of yet unidentified injury. According to the Argentine...

Bamford recovered from the injury he sustained against Brentford and he was going to play again today, he was going to be the starter at centre forward and in the training during the week he suffered an injury that is not identifiable. It's a knock underneath his hip and it's still not clear what's the reason behind it. The only thing that's for sure is that it's not a muscular problem because his muscles are healthy.

Liam Cooper and Andrea Radrizzani led the protests for the Whites after being knocked out of the FA Cup. The skipper took to social media to call the incident where the Hammers took the lead as a 'shambles', whilst everyone knew what Andrea Radrizzani was suggesting when posting 'very clear to everyone' on his twitter account! As usual Marcelo Bielsa took the moral high ground, and refused to lay blame at either the referee or VAR...

It's a decision I prefer to accept what the referee's say, not because I don't have an opinion, I think it's a collaboration us coaches should make, to accept the decisions to the referees even if they jeopardise us. If not we enter terrain where we can't offer what we want to offer, which is good football. There is a lot of arguments to say that the position I'm taking is incorrect, I consider them and I revise them but adding and subtracting I think the decision to accept their decisions helps their job and the spectacle. There are some conclusions that say the ones that demand the least would seem that it facilitates for the referee in case of doubts that they go towards the one that complains the least. I think the argument I'm offering is superior.


Whilst it is noble that Macelo Bielsa continuous to fall on his sword, it makes it easier for decisions to go against Leeds if their head Coach is fine with it. During Fergie's reign at Old Trafford, I can assure you that referee's would think twice before making a decision against his team!

I couldn't be arsed watching the game after knowing the score at work. If the club (and not just our club) can't be bothered with the FA cup why should i be. Welcome to the new reality. The PL is worth so much money we will be out of the cups early every year so we can fight to stay in the PL. Yippee.

Via the YEP, Rob Price has commented on the current injury situation at Leeds.

"I dunno what you're all bothered about? The lads are having a great time in the Adam Forshaw Suite, formerly known as the medical room. There's a real buzz about the place and I love the atmosphere here.

Rodrigo has learned the Flamenco guitar while he's been here, and with Paddy on the piano and the new lad Mateo Joseph on the castanets, we're kicking out a reet pong.

We do a great rendition of Viva Espana, that I've posted on YouTube, featuring Victor Orta jumping around with a rose between his teeth.

The ex-pats are so impressed that Kiko, Costa and Pablo have all said they are coming back to join in the fiesta We've even got young Joffy as our Paella chef and I'm thinking of consulting Gordon Ramsay to achieve a Michelin star.

Darren Anderton will be confirmed in MBs presser as the new Director of Physical Fitness.

Who'd have thought coming into this season that Adam Forshaw would be our most durable player?

Wtf is going on at Thorp Arch?

Do they not bother with physical preparation, injury prevention, rest and recovery, etc?

Is Marcelo preparing them for the Championship, Millwall, etc, by having them run at full tilt into brick walls and goal posts?