Good Morning. It's Monday 15th August, and here are the latest headlines from Elland Road...

Leeds missed out on the chance to climb to second in the table, as Southampton came from two goals down to grab a share of the spoils, in the souring 34 degree heat; the hottest day in Premier League history.

Jesse Marsch's Leeds dominated much of the first half, without having much to show for it. Bamford, James (who came on for Bamford on 28 mins), Harrison and Kristensen all had decent chances to break the deadlock in the first 45 minutes. Although few and far between, Southampton's best chance came on 30 minutes, when Llorente had to be at his best to deny Armstrong a one on one with Meslier. The home fans were baying for blood, but replays showed his sliding challenge was perfectly executed.

Leeds were rewarded for their hard work just thirty seconds after the interval. Harrison's low cross from the byline was glanced home by Rodrigo at the near post (a tactic the Whites had clearly rehearsed, having already tried it several times in the first half). They doubled their tally on the hour mark. Arronson's inswinging corner was met by Struijk. The ball looked destined for the top upright, but Rodrigo had to make sure. That's six goals in three games (if you count the Cagliari match).

With energy levels wavering, Saints boss Ralph HasenhuttL made three changes, and it proved Leeds undoing. With 18 minutes left on the clock, Armstrong burst down the left wing before crossing the ball low and hard into the Leeds penalty area towards Aribo. The Nigerian midfielder kept his composure, rounded Meslier before finding the back of the net, much to the anguish of three Leeds defenders on the goal line.

The goal was the shot in the arm the home side needed, and whilst Leeds began to fade, the host grew stronger and more confident. Nine minutes later, they were level. Mara's through ball carved the Leeds defence in half, and Walker-Peters made no mistake at the far post. It was only in the closing stages that Marsch bought on some substitutions, but it was far too late to influence the game!

Social media went into meltdown at the weekend, but it had nothing to do with the weather conditions! Prior to kick-off, Leeds' supporters were anxious to find out why Joe Gelhardt had been omitted from the match day squad. Anxiety turned to panic when Patrick Bamford limped off after 28 minutes; and thousands of fans took to Twitter in their droves to vent their frustrations.

Both players have had lengthy spells on the sidelines in the past twelve months, and whilst Victor Orta continuous to search valiantly for a marquee signing up front, time is quickly running out. There are sixteen days left of the present transfer window remaining, and whilst Leeds have a supposed £40m kitty, finding the right player has eluded them all Summer! Marsch's post match comments that both injuries are not too serious should reassure fans that both players should be back in action in a week or two. Leeds have 5 games in the next 19 days! According to Marsch...

Joffy had a dead leg and with a bunch of midweek games coming up we didn't want to push him. He'll be training this week, I think Patrick will be training too. Patrick is not bad. He felt a little tightness in his adductor. I've challenged him to be honest with us. He felt like he wasn't 100%. I think he made the right decision to come off. If it's a cup final, I think he plays. 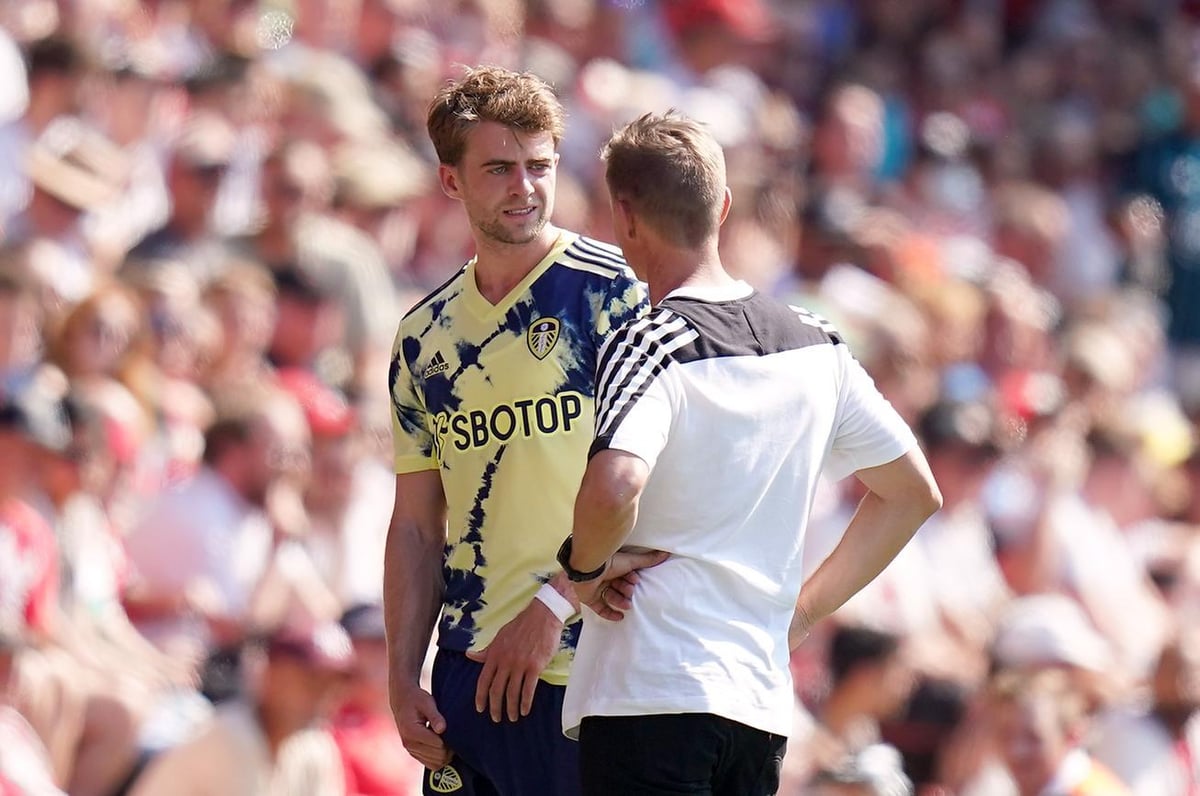 Italian Sports Journalist Gianluca Di Marzio has claimed that Leeds are confident they can capture Zurich forward Wilfried Gnonto during the Summer transfer window. The 18 year old has broken into Roberto Mancini's Italian squad this year, winning four International Caps. He came through the ranks at Inter Milan before joining Zurich two years ago. In the Swiss Super League last season, he netted 8 times (and 3 assists) in 33 appearances. He also scored 2 goals and provided 2 assists in 3 Swiss Cup appearances. According to Di Marzio, Gnonto is available for between €4m - €5m.

How many young strikers do we need Joffy, Greenwood, Joseph and Perkins who has a good engine apparently (did you see what I did there)

Marsch fluffed it - I can understand not making any subs waiting to see if we could re-take the initiative; but once Saints got their first goal he needed to bring on a fresh legs. He didn't need to change formation; Roca and Harrison were tired, Forshaw and Sinisterra could be direct replacements. Marsch has repeatedly said he would use his subs; so why didn't he?

Hopefully; he will learn from this.

weasel wrote: ↑Wed Aug 17, 2022 12:44 pm If you look carefully you will find a lot of posters who have a lot of faith in Marsch were questioning his lack of substititutions, even some of his biggest supporters from accross the pond.

Given that I would think that over 90% of the forum's posters thought Marsch made a big mistake by not bringing on subs are you now suggesting that over 90% of the forum have an agenda to portrait Marsch in the most negative light possible and don't want him as manager? I'm guessing though that you can dismiss these 90%+ of opinions in the same way you dismiss all the views of the 90%+ fans that weren't born in Leeds. The Venn diagram of fans who's opinions you aren't dismissing is incredibly small.

having supported leeds for over 50 years i believe i am allowed an opinion. JM stated in an interview before the match that he is used to managing teams in the heat and glad that we can use 5 subs this season , he went on to say he would be using his subs in this game.
We played really well in the first half and for 20 mins at the start of the 2nd half. It was clear that a couple of players were very tired and THIS is where JM should of used his subs. When they scored to make it 2-1 this was another point when subs should of been used.

Yes we did lose 2 points.

CHAPELALLMAN wrote: ↑Tue Aug 16, 2022 9:32 pm Exactly. You would think that we conceded two goals in extra time listening to some. It's just part and parcel of the agenda amongst a few on here to present Marsch in the most negative light possible. They basically don't want him as manager.

If you look carefully you will find a lot of posters who have a lot of faith in Marsch were questioning his lack of substititutions, even some of his biggest supporters from accross the pond.

Given that I would think that over 90% of the forum's posters thought Marsch made a big mistake by not bringing on subs are you now suggesting that over 90% of the forum have an agenda to portrait Marsch in the most negative light possible and don't want him as manager? I'm guessing though that you can dismiss these 90%+ of opinions in the same way you dismiss all the views of the 90%+ fans that weren't born in Leeds. The Venn diagram of fans who's opinions you aren't dismissing is incredibly small.

BillyBremner wrote: ↑Tue Aug 16, 2022 6:53 pm Why are you all saying that we threw it away. 2 goals up with 20 minutes to go is not a match win certainty. Don’t forget that there is another team against us eager to win as well and they can score goals because they play well not just because we are weak.

I think when you are 2-0 up and 70 minutes have been played against a team that is of a similar ability to you (i.e. not leading 2-0 against a City or Liverpool) you're going to expect to win at least 90% of the time.

Southampton would have been eager to win all match so by that logic it would be reasonable to expect them to score at the same rate as they did in the last 20 minutes and score 9 goals in the match.

On This Day: Leeds put in faultless display to annihilate Besiktas

Leeds United 6, Besiktas JK 0 Champions League, Phase 1 Group H After beating AC Milan 1-0 United had only managed a 1-1 draw at Derby County, and United had slid down to tenth in the Premier League,...