Good Morning. It's Friday 16th September, and here are the latest headlines from Elland Road...

Jesse Marsch has been handed a £10,000 fine and a one-match touchline ban after admitting to using improper language during the 5-2 defeat by Brentford almost a fortnight ago. The Leeds gaffer was incensed when referee Rob Jones failed to acknowledge a blatant push on Summerville in the host's penalty area.

Having already awarded a dubious penalty to Brentford in the first half (which broke the deadlock), Marsch snapped, and made a beeline for Keith Stroud (the fourth official). Moments later, he received his marching orders. He will be suspended for the visit of Aston Villa on the 2nd October. The Football Association said in a statement...

Leeds United FC’s Jesse Marsch has been fined £10,000 and suspended from the touchline for their next fixture following a breach of FA Rule E3 that happened at their match against Brentford FC in the Premier League on Saturday 3 September 2022.

The manager admitted that his language and behaviour during the 64th minute of that game was improper. “An independent Regulatory Commission subsequently imposed his sanctions. 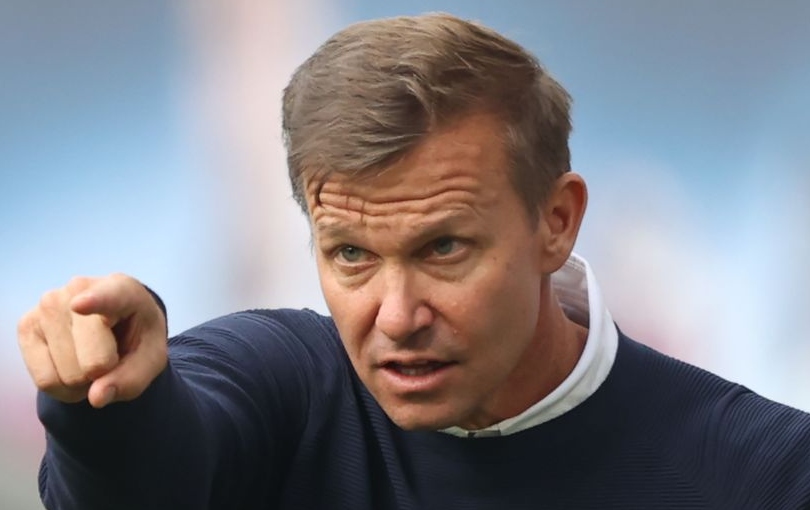 U21's to field strong line up against Southampton

A bumper Elland Road crowd is expected this evening as Leeds U21's take on Southampton. With ten points out of a possible twelve, Michael Skubala will be delighted with the start his fledging stars have made. They are boosted by the news that Jesse Marsch has made four senior players available, as they regain their fitness following injury.

With no top flight games until the 2nd October, Luke Ayling, Liam Cooper, Junior Firpo and Patrick Bamford all have the opportunity to get much needed minutes under their belts, although most eyes will be on new signing Wilfried Gnonto. The 18 year old has impressed during training, and is expected to play some part this evening. Bamford and Gnonto have their work cut out displacing Mateo Joseph and Sonny Perkins, who have four goals apiece from as many games.

Missing a guilt edged opportunity, 89% of his duels lost, and giving away possession away on ten occasions, you won't be surprised we're talking about Tyler Roberts. He endured a torrid trip down to Millwall midweek, yet his teammates did the business, and returned to West London with three valuable points.

Roberts joined QPR on a season long loan during the Summer, with the view of a permanent move if all goes well. Unfortunately, with only one goal in 399 minutes of game time, he has yet to make an impact with the Hoops, slipping down to 15th place in the WhoScored register, with a rating of 6.37. Although still only 23, the former Baggie needs to drastically improve or risk slipping down the divisions.

Marsch shouldn't have been sent off. A fine, maybe. But it wasn't a red card offence and therefore not a touchline ban either. It's the common case of bigger clubs getting better treatment. And he was absolutely right. VAR should have checked the foul on Summerville. If they'd given it a fraction of the time they'd given their penalty incident .... I'd say the referee should be banned too. But I know their performance are al evaluated and ranked.

Unfortunately Jesse will have to watch his tone now. Refs will have him marked as a trouble causer. He hasn't helped himself, being so open talking about how he likes to get inside the officals heads. Marsching on together Jesse. ALAW. And since they can't fine me, f**k that ref, f**k var, and f**k the disproportionate treatment of our club.

The context of the Milwall v QPR game was that Roberts was bad? Well, doesn't speak much of our other two loanees that were on the losing side despite such a terrible Roberts performance. Give him a break. He's been continually injured. Needs more game time to start judging.

And Bamford and Gnonto will have their work cut out replacing Joseph and Perkins? I'm guessing that was intentional sarcasm. Bamford the best striker at the club and a 4 times Italian national. I think a lot has been placed on Joseph. Looks a great talent for sure. But we should be looking at next season before we start assessing where he's at.

Irish Ian wrote: ↑Fri Sep 16, 2022 9:59 am I was reading some comments from QPR fans and they were saying he was getting knocked off the ball too easily, which was a common failing with us.
He isnt lightweight either but if he cant get that part of his game addressed he wont survive in any league.

Nice work if you can get it.

Orta took him from the beautiful WBA, and found him a rich home down the smoke.

I rest my case m'lud.

Yep. Seemed like a ' bargain' at the time - like a rug in a Turkish market sold ' for you sir at a special price. '

Needs to keep his head. Whopping fine for a word, though...

Flashback: Huckerby emerges from the shadows to send Leeds into the UEFA Cup second round

Leeds United 1, Partizan Belgrade 0 UEFA Cup, First Round, Second Leg Darren Huckerby emerged from the shadows to score the goal that won the Second Leg 1-0 and the final aggregate 4-1 to send United...

Brazil, France and England - legal bookmakers and Richy Fish casino review see these teams as the main favorites for the upcoming World Cup in Qatar. We will tell you more about how bookmakers now assess...

The excitement of football

Football is the most popular sport in the world. Some people cheer for their favorite team, and others for an interesting game. A lot of money is invested in football, and players receive fabulous salaries,...