Good Morning. It's Tuesday 20th August, and here are the Leeds Utd headlines...

A last gasp free kick from Mateusz Bogusz gave Leeds U23's the perfect start to the Professional Development League season against Millwall. Strujik opened the scoring just before half time after some good work from Alioski. Carlos Corberan made three changes at half time with Eddie Nketiah, Mateusz Bogusz and Gaetano Berardi replacing Shackleton, Alioski and Helder Costa. It wasn't long before Nketiah made his impact known. The 19yo calmly slotted the ball beyond the Millwall shot stopper with 56 minutes on the clock.

Against the run of play Millwall were soon on level terms. They were awarded a spot kick following an alleged foul from Hasannah, and although Meslier managed to tip the ball onto the bar, he couldn't prevent the rebound. With 5 minutes left Wall were level thanks to a well executed strike from the edge of the box leaving the keeper without a chance.

Thankfully deep in stoppage time Bogusz was on hand to curl a free kick beyond the stranded Millwall keeper. I cannot think of many first team keepers that would have got close to that. Bielsa, hope you are taking notes - your first team have not scored direct from a free kick since Boxing Day 2017.

Will Bogusz get his opportunity in the first team? Is he good enough? If you were Costa, would you be annoyed at the lack of first team action? What about Clarke?

Brentford head coach Thomas Frank has been talking to the press ahead of tomorrow evenings game at Elland Road...

The beautiful fairytale is we are winning 1-0 from a set piece and Pontus scores.

We played two games last year that were very even, we respect them, they play fantastic football. I admire the manager Marcelo Bielsa massively, but we are confident and believe we can go up there and win. We know its massively difficult to go up there, but we are looking forward to it! 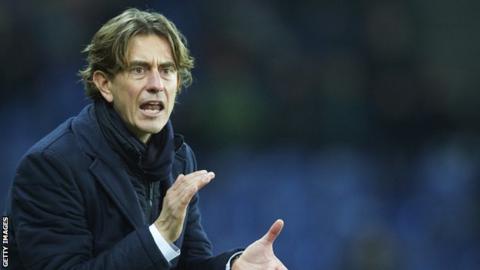 
Bog will get his chance but will have to be patient that’s the Bielsa way
Yea bet Costa isn’t happy but same he’ll get his chance and needs to keep match fit by playing for the U23s if asked
Clarke who? No sorry to be serious he needs to prove he’s worthy of a place ahead of the ones already holding the shirt but it’s a long season so we’ll need everyone to play their part

The Brentford manager comes across well but he’s stoking the fire mentioning Pontus scoring, however this game worries me without the Pontus circus, just hope our supporters give him a warm welcome back

Got to say I criticised Harrison a few times last year for been light weight, no end result etc... and lovely to see so far this season he’s improved massively so you have to say at the minute he looks good value for money, he continues like this for the rest of the season and we go up I’d definitely pay the £20m.

Costa and Clarke will need to take their chance when it comes around, play so well that Bielsa can’t leave them out, not sulk and moan which I’m glad to see they aren’t and they’ll get that chance, like I say we’ll pretty much need the full squad this season
A bumble bee under the laws of physics shouldnt be able to fly, but it does because no one has told it that it can't
Top

I just tuned in just in time for Bogs (

) winner. Good start to the season, itvlooks typical Bielsaball they score two we score three. How did Edmunson play?

I hope we get a look at Bogs, I am sure once injuries and suspensions manifest themselves the entire squad will be needed. Thing is I cant see where Clarke will fit in to this side. For confidence reasons those three along with Ed will need gametime. The Stoke Cup game looks likely..

Brentford. Well when you put a microphone in front of a manager they speak... Of course he wants to talk his side up. If they come to El and try and play their brand of football we will eat them and he knows it. So expect the usual. Janson vs Kiko at set pieces should be fun....


Guys, Harrison looks improved but he only is worth a £20m pricetag if we promote and he chips in with enough goals and assists. It is easy to get ahead of ourselves. Same as some are getting all girlie over two Kiko clean sheets. It is still August

I'd rather be getting girlie over Berardi and dirty sheets, but clean sheets are not to be sniffed at.

Dreamt last night about Leeds's new stadium. It was a huge, high tec structure of glass and steel, the most impressive in the world. I was staying in the adjacent fans hotel, which was so large that I got hopelessly lost by taking the wrong staircase. There was also under construction an avenue of elegant mansions for the players, personally designed by Marcelo. We're going up, I tell you!
Top

I'd rather be getting girlie over Berardi and dirty sheets, but clean sheets are not to be sniffed at.

To be fair to the Millwall keeper, Bogusz's free kick got a massive deflection off the wall. Mateusz is certainly good enough for the bench, but is not a first team starter yet. He did some lovely stuff yesterday, mixed in with stuff that wasn't so good. He will come good, there is no doubt, but we will have to be patient.
Delapsus Resurgam - When I fall I shall rise!
Top
Post Reply
6 posts • Page 1 of 1