Good Morning. It's Wednesday 2nd October, and here are the Leeds Utd headlines...

Although the visitors launched sustained attacks on the Leeds Utd goal as the game progressed, Casilla rarely looked troubled. It was in fact the Baggies shot stopper Johnstone that pulled off a series of amazing saves in the first half to keep his team in with a chance.

We saw injuries to both Cooper and Shackleton. Both looked like they could be out for a number of weeks.

For the first time this season Leeds had (slightly) less possession than their opponents, though they have still managed circa 20 shots at goal, and more importantly, 9 of those on target; twice as many as in other games this season.

In brief, this is what both Managers had to say after the game:-


"It was big, big effort from the team tonight.

"We tried to manage the match, but at the end West Brom's creative play was difficult to defend.


"I'm very disappointed with the result but I'm proud of how we played second half. We knew who we were playing and we talked about this as a big opportunity.

"They (Leeds) were more aggressive in the first half and scored a goal. But in the second I didn't see Leeds for a long time.

"I think we definitely deserved one goal and I'm disappointed that we didn't take any of these chances." 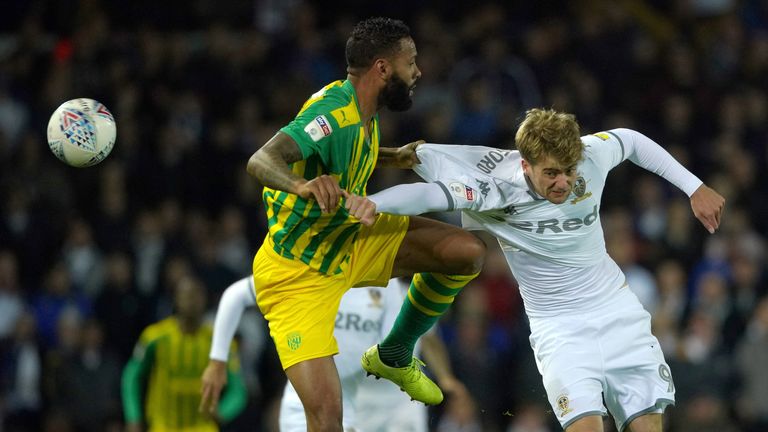 Having been left out of the U23 squad for Mondays defeat against Crewe, many of us assumed that on loan Gunner Eddie Nketiah would have a major part to play in last nights game against the Baggies; some even thought that he would start. Unfortunately, the England U21 International who has netted 21 times in 27 appearances for his Country was deemed surplus to requirements last night.

I can only surmise that both he, and his parent club are becoming disillusioned at his lack of game time. With almost a quarter of the season gone, and only a handful of substitute appearances, what would you do if you were in Arsenal Managers Unai Emery shoes? 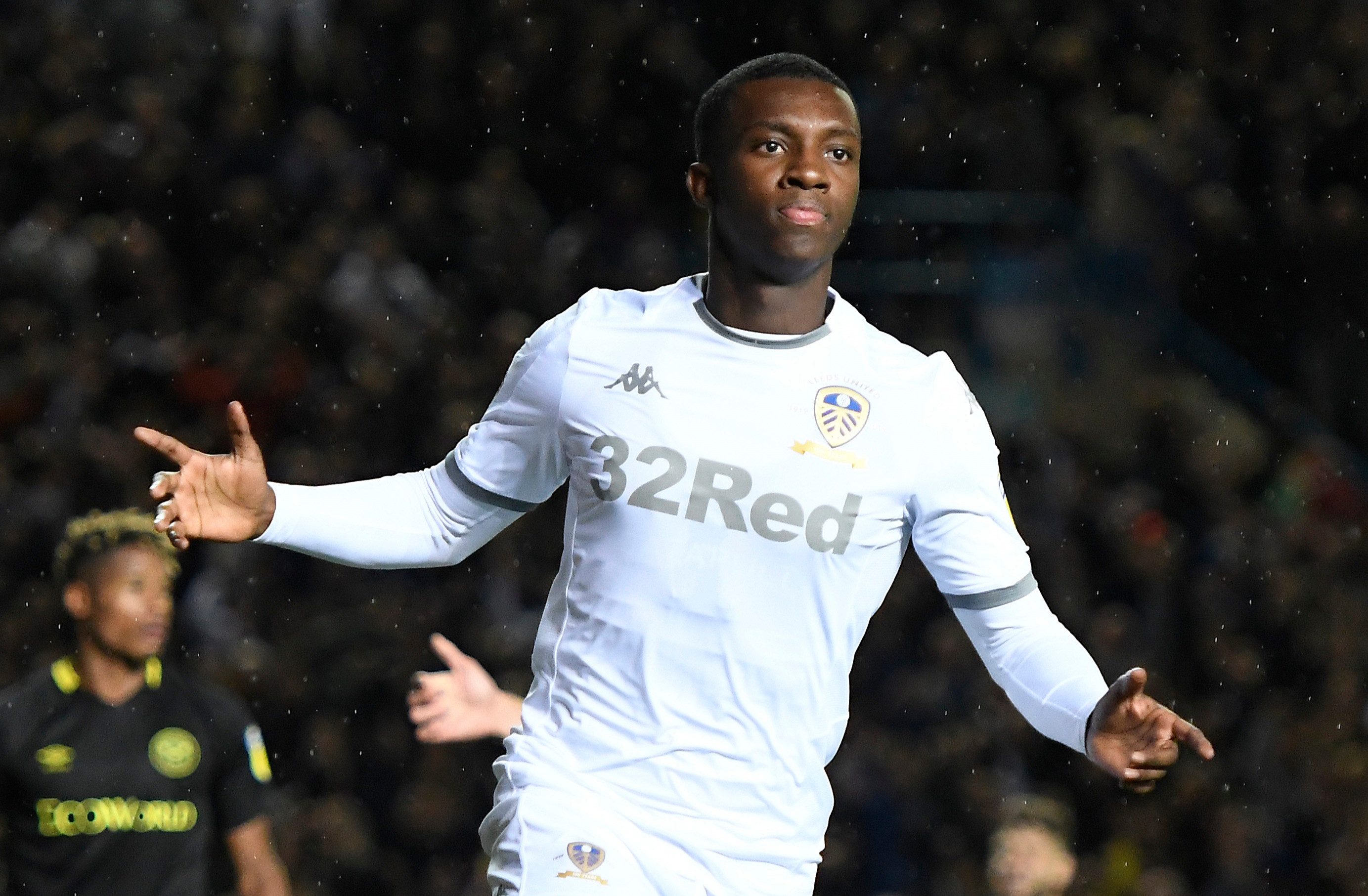 Great result last night against a very good West Brom side who pinned us back in the second half although to be honest their keeper had as many saves to make as Kiko did.
We've played better this season and not won so hopefully our luck is changing.
Jamie Shackleton was excellent in the first half and it was cruel on him that he has sustained a hamstring injury.

I think the original plan would have been to put Nketiah on at some point but due to the injuries and the fact that we were under the cosh, MB had to change his thinking.
Bielsa also made a point of saying that taking Roberts off was purely tactical and not due to his performance.

The fact is that as a team we seem to play better when we can keep the starting 11 on the pitch for as long as possible, and last night Lord Bamford played a blinder putting in a shift that would have shamed a Yorkshire miner on piece work. He was playing like his wage depended apon it... and he was awarded MOM and the fans appreciated his phenomenal work rate and were chanting his name

The dynamic of the game changed in the second half and WBA were not only throwing the kitchen sink at us, it was the whole custom kitchen with fridge, washing machine, microwave, deep freeze and garbage disposal unit. Bielsa sees this and hooks off an attacker Tyler Roberts and puts on a defender Luke Ayling. He had surmised that it would be better to defend than to attack, so bringing on a player like Nketiah would have served no purpose. The Arsenal manager if watching the game must have thought to himself I could learn a few things from this Bielsa chap

What we saw last night was a reversal of roles. Leeds did to WBA what other clubs have been doing to us... nick a goal then park the bus. The stonewalling last night must call into question the accusations that or defence is to small, lacking in height or positional sense... last night I thought they were EMMENSE, especially White and Dallas, and Berra, well Berra does what Berra wants and nobody stops him, there is a rumour going around that he and Pontus were twins separated at birth, since they both have that uncompromising attitude.

For me it was a masterclass in game management and Bielsa deserves full credit for having the ovaries to have the confidence to make the substitutions that he did.

True grit result last night and a good defensive second half restricting them to maybe 2 chances. I thought Berardi slotted in well and had a good game. I think if the game had panned out differently Nketia would have been brought on but we needed to protect our lead. However I think he will be called back to Arsenal in January as I cant see them being happy that he is getting virtually no first team game time.
Top

A great gritty performance.
My guess is that Ed would have come in for Bamford as per usual but the game situation dictated otherwise.

Re Arsenal the fact that their striker is banging them in probably deflects any anxiety they have, but not for ever. We need end product.
'We can wait for the next game with serenity'

I must say, I was more pleased with last night's result than I would've been if we'd battered them, as that would've indicated that WBA were underperforming and we wouldn't have earned it as we did slogging our guts out. I was cacking my pants for the last 30 mins but as it stands we have conceded the least league goals thus far all season, something I'd have thought impossible not long ago, and absolutely vital when our attackers are going through a dry spell as they are now.

So far one point better off than last season. We take more than 4 points from the next three and we'll be well on course.

Eddie is playing exactly to expectations so far. I cannot for the life of me believe Arsenal expected him to be our starting no9 this early into the season, no matter Bamford's form which hasn't been near bad enough to drop him outright, and I don't believe we would've been foolish enough to promise such a thing. Nope, all this nonsense about him going back in January is tabloid rubbish. He's exactly where a young loanee striker should be - sub appearances and cup games until later in the season when he's gotten more experience and rotating our hardworking centre forwards becomes necessary.

Apparently Shack's injury isn't as bad as first feared but the one I'm really concerned about is Pablo. While he was a bit off before getting injured, he was still capable of playing that vital pass and we will need him over the course of the season. Costa is showing glimpses of his quality but we can't expect him to be at full tilt just yet - he will improve as he gets more game time, I'm convinced of that and laos that when he and Pablo can play together, they may be unstoppable.
Top

by which time i was thinking we're doing well and on for the win but those last 20 mins was backs to the wall stuff but the defending was brilliant and we could even have scored again had Harrison kept his composure on at least 2 occasions...he has to be one of the most frustrating players ever ! I hate it when he looks up to the heavens after fluffing his lines yet again ! He won't bloody help you Jack !
Leeds showed that they have the mental toughness required to win this league and conceding only 5 in 10 is a great platform to work from but have they got the creativeness to break down teams who park the bus...at the moment I can't see it and this is my main concern.
MB for once got the subs right in recognising we needed defensive back-up and made the necessary adjustments which I'm sure he wouldn't have been totally comfortable with given his attacking nature but at last he did the right thing so let's hope he's turned a corner in that respect as it won't be the last time that we'll be facing the kitchen sink being thrown at us....and we still created chances after Ayling came on for Roberts.
Next up is the annual ball-ache at scumwall where Leeds once again will have 70% possession 100 zillion chances to score but come away with well...that remains to be seen

rab_rant wrote: ↑
Wed Oct 02, 2019 7:50 am
What we saw last night was a reversal of roles. Leeds did to WBA what other clubs have been doing to us... nick a goal then park the bus. The stonewalling last night must call into question the accusations that or defence is to small, lacking in height or positional sense... last night I thought they were EMMENSE, especially White and Dallas, and Berra, well Berra does what Berra wants and nobody stops him, there is a rumour going around that he and Pontus were twins separated at birth, since they both have that uncompromising attitude.

I would disagree that we did to WBA what teams had been doing to us. Most of the teams we have played have simply been clinging on for dear life, like a boxer on the ropes, without any real attacking threat. We combined solid defending with attacking purpose when we repeatedly hit them on the break, no team apart from Barnsley, has created as many chances against us as we created against WBA in the second half yesterday - despite us supposedly being under the cosh for the whole second half if the media is to be believed.

Berardi is different to Pontus in my eyes. With Pontus it always seemed it was about him first rather than the team. With Berardi I get the feeling that he is a disciple of Billy Bremner.
Senor El Weasel
Top

West Brom are the only team to play an attacking game against us at ER this season.
Top

Berardi is a Leeds legend for me..longest serving player I think now and deserves a lot of respect.
I don't like staying at home
When the moon is bleeding red
Woke up stoned in the backseat from a dream where my teeth fell out of my head
Cut it up, cut it up, yeah
Everybody's on something here. My God send chemical best friend. Skeleton whispering in my ear
Top

Ditto
I'm often accused of acting like I don't care