Help support the site by using our Amazon Affiliate link when making any purchases from Amazon.
Post Reply
7 posts • Page 1 of 1

Good Morning. It's Monday 2nd December, and here are the latest headlines from Elland Road...

Leeds returned to the top of the table in emphatic style hammering Middlesbrough 4-0 at Elland Road on Saturday. Goals from Bamford, Costa and a brace from Klich saw the Whites return to the top of the pirch at least until Monday evening when the Baggies travel to the Deepdale Stadium.

Not only do Leeds have the meanest defence in the division, conceding almost one goal every other game, but on average the remainder of the top 6 have conceded twice the amount of goals compared to Bielsa's men. It is not surprising therefor that the Whites also have the best goal difference in the Championship!

The only downside on Saturday is influential midfielder Kalvin Phillips picked up his 5th booking of the season and will be sidelined for Leeds West Yorkshire Derby against Huddersfield on Saturday. Word has it that Bielsa has already nominated Ben White to take his place.

Thoughts? If a silly offer were to come in at the end of the season for Phillips, if Leeds were able to sign White instead, who would be in agreement of that?

Moving White to defensive midfielder would surely mean recalling Berardi to partner Cooper in the heart of the defence. Whilst on the subject of Berardi, the 31yo will not be offered a new contract when his terms expire at the end of the season according to sources at Elland Road!

Looking at the league table, who do you think (apart from Leds of course) will be promoted this season? Who would you like / dislike to see / miss out on promotion? The same question regarding relegation! 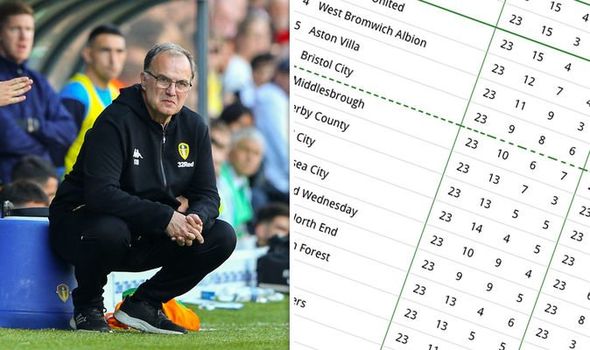 Great to enjoy the feel good factor generated by a high scoring win!
But let's not get carried away, it was a deleted Boro side who faced us on Saturday. What was good was the clinical finishing.

White as DM. I think HE could carry that off, but I wonder if a three at the back of Ayling, Coop and Berra would be viable... It seems to me that it is an accident waiting to happen. I'm surprised MB hasnt slotted Dallas into Phillips role for the game...

Selling Phillips. Difficult. Good sides are built around great players and Phillips has the makings of a great player. For Leeds he is a once in a generation find. But if there was a bid that measured up to half the value of the club? Unfortunately unless or until the overseas money arrives we will always be a selling club.

Promotion. I think this us a three horse race. Fulham hopefully will come third. They stent brilliant all over the park but their strikers are ruthless in front if goal and their keeper isnt too shabby either. West Brom are the other side. I really admire them. Funny enough their fans are clamouring for Gayle to be brought in in January!
Top six:
WBA
Leeds
Fulham
Owls
Forest
Cardiff.

Fulham to beat Forest in the final.

We head into what could be a season defining month. I know that is s big statement when you think it is only December. Six games with five of them against sides who see themselves as top six. Taking points off your rivals can be critical.
'We can wait for the next game with serenity'

I wouldn't want to see Brentford go up, especially when they were trying to rub our noses in the dirt having signed Jansson, followed by Jansson's comments about how Brentford are a team that is going places, hence him signing for them.

Also, I'd love to see Derby go down, though I don't think its going to happen
Top

It was indeed a great win on Saturday albeit against a Boro side ravaged by injury. You can only play what is put out against you and we dispatched them in ruthless fashion.
Only a brilliant save by Pears prevented Kalvin from getting on the scoresheet.
He will be missed against Huddersfield but hopefully not enough that we cant take at least a point.

If we were able to buy White with money generated from a Phillips sale it would soften the blow but I'm pretty sure White will be playing for a top Premiership side next season earning more than we can afford to pay him even if we do go up.
His performances and our goals conceded won't have gone un-noticed and Brighton will struggle to hold on to him in the summer. I'm just grateful we have him now.

If we do go straight up I'm pretty sure it will be with West Brom although Fulham are annoyingly on a good run and are my main worry. I feel all the other sides in the chasing pack are to inconsistent to mount a serious challenge. Cardiff maybe, which would be even more annoying now that Harris is their manager.

Barnsley are doomed i think despite winning on Saturday and I think Luton will go with them. I think Stoke and Huddersfield have enough to get out of trouble so I think the third side to be relegated will be either Wigan or Charlton.
Shame it won't be Millwall, they seem to be pushing for a play off spot.
Wouldn't mind Jed Wallace from them in January if we could get him?
Top

Oh I forgot about Brentford. Can't see them making the top two but they look good for a play off place.
Football has a habit of creating stories and wouldn't it be ironic if we ended up in the play offs against them?
Urrgh it doesn't bare thinking about.
Top

All we can do is keep winning be nice to widen the gap on 3rd for if and when a blip comes, Fulham away later this month will be a massive game.

If we don't go up, we'll lose Phillips and White, if we do keeping both would be nice, doubt we'll be able to afford the price they'd want for him, as we've put him in the shop window, as Villa did with Mings, he went from a £10m player to one they paid £28m for because of how well he played for them.

As it stands, hopefully the 3 footballing teams that are the top 3 now will be promoted, a victory for how the game should be played.

Relegation.Boro, Barnsley and Luton.
Would love to see Derby relegated but unfortunately can't see it happening. Unless the EFL did the right thing and deduct them points, which they won't.
Top

I'm not too concerned about Fulham. Yes, they're a strong squad capable of battering lesser teams but they're very capable of losing to them as well. I did predict them to be a sleeping giant and can't foresee them dropping out of the playoff spots barring a really bad run of form, but I don't think they'll catch us up either.

I said it'll be a battle for top spot between us and WB, with the real drama to be found in 3-6th, and I stand by that. We're plain better and more balanced than last season, and we've nothing to fear from any team except ourselves.

White as DM is just a natural evolution of his natural talents. He's already been playing like one at times this season and the most important thing is he'll be right there with Coops and Bera to keep things composed in the final third. Against Uddersfield he'll shine, I've no doubt about it.

If we had to keep either him or Kalvin I'd sell three or four others to keep them both. Indispensable isn't strong enough a word to describe them two right now.

Promotions - Us, West Brom and I'm going to be brave and say Forest, who will narrowly beat the pack into 6th amd cheese the finals with flukey, scrappy goals.

Relegations - Barnsley, Luton and Wigan. Stoke are starting to pull it together, Reading and Charlton will always pull a vital result out of the hat but Wigan look to have no real idea of how to arrest their slide. Much like Derby without Harry Wilson and Mason Mount, Reece James's absence exposes just how mediocre their team actually are.
Top
Post Reply
7 posts • Page 1 of 1