Help support the site by using our Amazon Affiliate link when making any purchases from Amazon.
Locked
254 posts

Ridiculous but may even save our season Spiderboy to the rescue
A bumble bee under the laws of physics shouldnt be able to fly, but it does because no one has told it that it can't
Top

Leeds United acknowledges that Kiko Casilla has been found guilty of breaching FA Rule E3 during our Sky Bet Championship game with Charlton Athletic in September 2019.

Casilla has been banned for 8 games following the verdict from the FA.

However, it is important to recognise that Kiko has always denied making any racist comment.

The FA panel have based their decision on the balance of probability rather than proving Kiko to be guilty beyond reasonable doubt, which we have always believed is the more appropriate burden of proof.
It will all come clear in the end
Top

Disgraceful that they can do this without proof, just probability, that they think they are above the law.
I wish Kiko or the club would take it to the high court.
Last edited by gessa on Fri Feb 28, 2020 7:44 pm, edited 1 time in total.
It will all come clear in the end
Top

Announced at 7pm on a Friday before a game, over a week after the whole thing concluded. Disgusting. As for the charge, I’m sure he said something, but I’m also sure he didn’t intend offence.
I’m glad he finished the season with 3 clean sheets, as he won’t play again because Meisler will be too good to drop

I realised I was dyslexic when I went to a toga party dressed as a goat..
Top

So 'mark that black man in Spanish' is racist

Why am I not surprised by the FA actions
Top

Contemptible on the part of the FA.
Top

gessa wrote:Disgraceful that they can do this without proof, just probability, that they think they are above the law.
I wish Kiko or the club would take it to the high court.

Without a doubt. If I was Kiko I would take it as far as it needs to go. Who the f*** do they think they are . Take them on Kiko !

Why is always Friday night?

This stuff should be done a couple of days before matches, ruins your preparation.
Top

I'd imagine we knew a bit earlier before it was announced..Probably yesterday. Looking forward to seeing Meslier but it's not great to lose you goalkeeper at anytime. Meslier is very young
Honey dipped flim flam
Top

Can't Kiko appeal the decision and the bann put on hold until there is a definitive judgement from the appeals court. I don't think anybody want their copy book stained by being branded as a racist. It seems very unjust that a man is condemned on a probability. Charge me as an arsonist cos I have a box of matches and there is the probability that I might start a fire. Surely you need to look into a person's character and how they have behaved in the past before you can draw conclusions. If anyone has brought the game into disrepute it is the kangeroo court that is the FA/EFL.

The 'balance of probability' as opposed to 'beyond reasonable doubt'

I'm in way condoning any form of racism, but it seems that if an accusation is made it is very difficult, if not impossible to defend yourself irrespective of the seeming lack of any substantive evidence.

However, if he did say 'it' then it's deserved and doesn't reflect well on our club.
Top 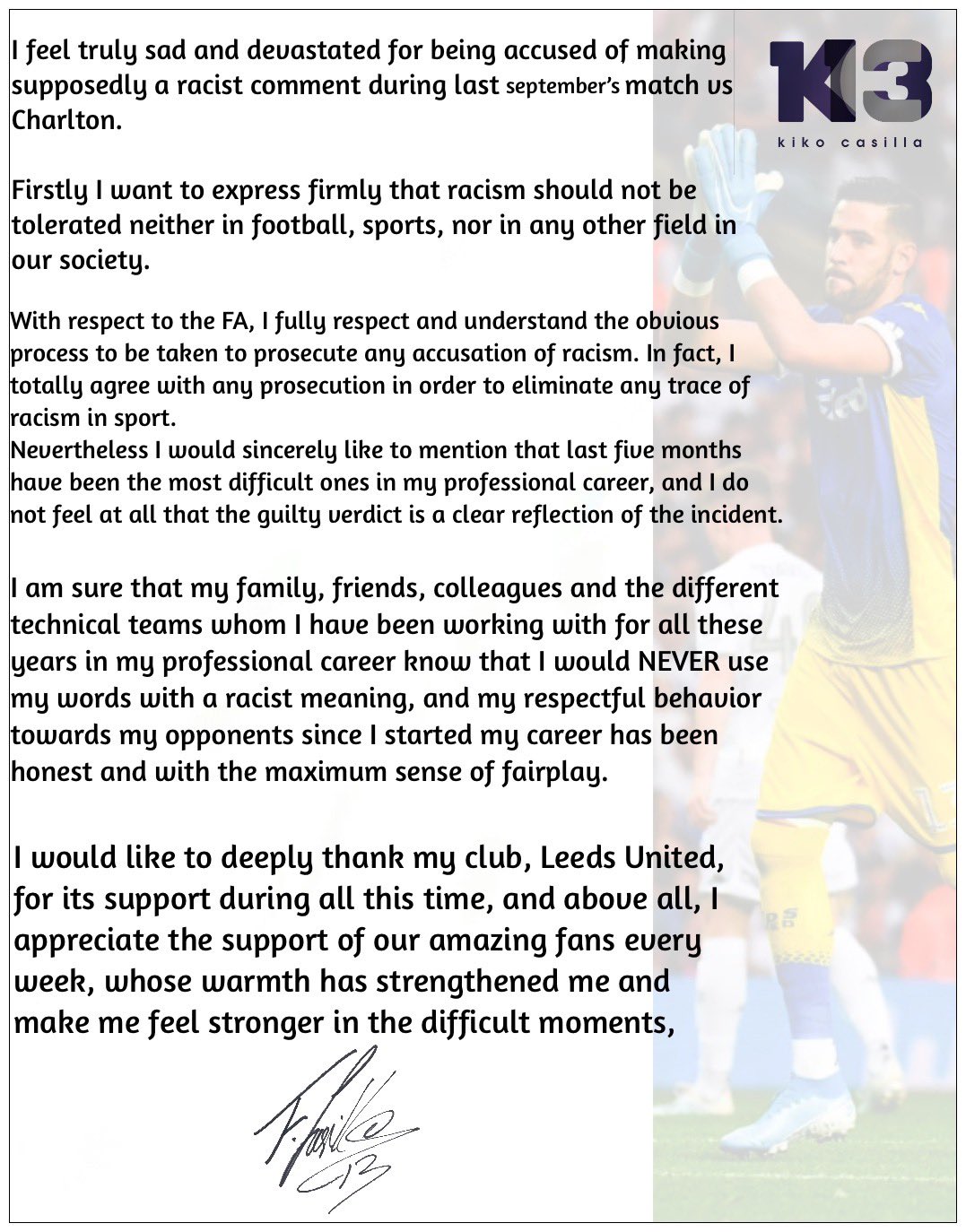 Pathetic. How can someone be found guilty with no real evidence and just base it on "probability" ? Surely that would not stand up in any court ?
Top

Hypothetically if this was Harry Kane accused would the FA have come to the same conclusion? (No way suggesting Harry is racist or anything).

Absolutely mad they can brand someone a racist based on probability is ludicrous.

As Kiko says, absolutely fully support prosecution in any walk of life to eliminate racism.

But based on probability is so unfair.
Top

As others have said, without wishing to pass judgement if Kiko feels he is innocent it’s a no brainer to take this to a court of law. In this day and age it seems out of step and incongruous for an organisation to operate like the FA does. One could argue with some legitimacy that they themselves are operating outside the law by denying Kiko a fair hearing.

Must be challenged.
Top

We haven't seen the details yet, they will come out next week. We can pass judgement on Kiko and his future at the club. For the moment all we can do is put our full support behind Illan Meslier.
Top

Unfortunately it comes down to the word of a black player vs the word of a white player. In the current climate there is only one way it is going to go. That's not a racist statement but it's a lot easier to punish Kiko than say the black player was mistaken
Top