Help support the site by using our Amazon Affiliate link when making any purchases from Amazon.
Post Reply
15 posts • Page 1 of 1

If any of our young players are going to nail down a starting role next season who will it be?

Personally i think fleet footed winger Ian Poveda is the most likely.

He must have worked so hard during lockdown to impress MB, we know how hard it is to force your way into MB's tight squad so that shows his desire to succeed and for him justifies leaving Manchester City. Furthermore he seems to get on well with his teammates, really taken to him it seems.

He presses and works hard which is vital in the system and vital if he wants to stay in MB's plans.

For me he is the most positive of our wingers, he is uber direct, his 1st though is to go forward and be progressive, in the Prem where space should be less limited thats a real asset to have.

Also he is a tricky kid, he has that Messi low centre of gravity and quick feet, able to wiggle out of tight spaces making pressing him very risky. Standing off him isnt sensible either because he is fast and confident running with the ball.

Finally, he has a decent footballing brain for one so young. You can tell he came from a place where top players were. He has clearly watched De Bruyne, David Silva, players who know when to pass and where.

So imo Ian Poveda has the best chance of forcing his way into our first 11.
What do others think? Who could be our next breakthrough star

I think injuries would likely be the easiest way in for any of our youngsters. Shackleton is probably the closest to being a first team starter although Strujyk hasn't done himself any harm and would likely be first choice back up now as centreback and def mid.
Senor El Weasel
Top

Shackleton is the obvious contender
Top

Dont rule out young albeit very young Charlie Allen.
Yes just a kid.. but as we must know if their good enough !
Kids that are willing to listen and have the desire to not be afraid to not only show themselves but have the proper appetite will usually succeed.
Top

Shackleton isn't a breakout star, he's been in the first team for 2 seasons.

Depending on if we improve in certain areas, I'd say Casey or Cresswell as I see us being light there. Perhaps Kenneh too.
I promise to be positive only for 20/21

Poveda looked our best winger, who actually looked to play a decent ball in rather than the usual fayre.
Top

As a lad local to me (born in Kippax and now domiciled in Garforth) Shacks would be my hope, and a nicer lad you couldn't wish to meet. We don't have a lot of pace in midfield, and he has it in abundance. Game time in the Prem could be difficult for him, and there is talk of him going on loan in the Championship, but I hope that we hang on to him. Joe Gelhardt is very, very highly thought of.
Delapsus Resurgam - When I fall I shall rise!
Top

Gandalf wrote: ↑Tue Aug 11, 2020 3:03 pm As a lad local to me (born in Kippax and now domiciled in Garforth) Shacks would be my hope, and a nicer lad you couldn't wish to meet. We don't have a lot of pace in midfield, and he has it in abundance. Game time in the Prem could be difficult for him, and there is talk of him going on loan in the Championship, but I hope that we hang on to him. Joe Gelhardt is very, very highly thought of.

Depending on if we improve in certain areas, I'd say Casey or Cresswell as I see us being light there. Perhaps Kenneh too.

One or all three could go out on loan

As for Shacks he's never cemented a place in the first team, he is definitely ready to step up imo!
Top

they may get a run out in the cups if we face lower league opposition, other than not sure, unless depleted by injuries. not bielsa's way
Top

Poveda will smile his way into the first team. The joy on his face was palpable when he set up Shakelton's goal.

I am reminded of what Cantona said. "The best moments of my career was when i made a pass that allowed a team mate to shine and have the glory"

If we have players that play for each other then we will do just fine in the premiership. 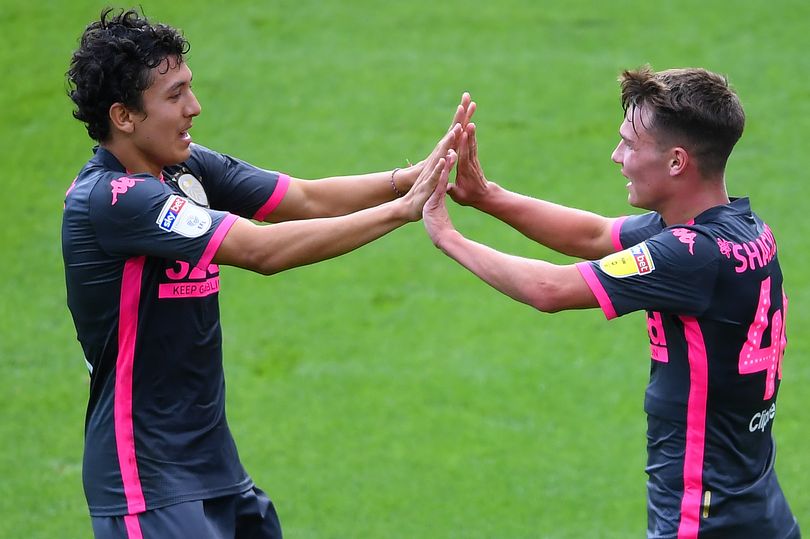 Poveda and Shackleton and Meslier look the most likely, though Shackleton should have been a first teamer last season but injuries stepped in the way. He looks the best of them all, though.

Poveda can come on for Costa and Shacks for Klich. Meslier I hope will take over from Casilla who is a liabilty.

Gotts, Davis, MacAlmont, Stevens I reckon may be playing for Barnsley or Huddersfield, which wouldnt be a bad thing.

Although if we make four signings it might change the dynamic somewhat.
'We can wait for the next game with serenity'

I'm going to go with Pascal Struijk. He looks a big strong lad and we will need more of that in the Prem.
Top

Shackleton should be heavily involved next year

If we don't sign another striker, then Gelhart could have a big role to play off the bench
We've been through it all together. And we've had our ups and downs
Top

Bogusz
I realised I was dyslexic when I went to a toga party dressed as a goat..
Top
Post Reply
15 posts • Page 1 of 1