Help support the site by using our Amazon Affiliate link when making any purchases from Amazon.
Post Reply
20 posts • Page 1 of 1

Good Morning. It's Monday 19th October, and here are the latest headlines from Elland Road...

A report, just disclosed shows Whites fans have had more football related arrests than than any other club in England and Wales during the 2019/20 campaign. In total, 52 Leeds fans were arrested last term, enough to put them atop the league of shame. Leeds supporters were detained 19 times for public disorder, 15 times for alcohol offences, 10 times for violent disorder, three for throwing missiles and two for pitch incursion among other misdemeanours. In total there were 1,089 football-related arrests in the 2019-20 campaign, down 20 per cent compared with 2018-19.

It is not known whether the arrests that were made at the strongly critisised open top bus celebration were taken into account? The Leeds hierarchy, who had begged fans multiple times over recent days TO STAY AWAY from Elland Road were rewarded for disobeying orders, and treated to the open-top bus celebration. As news spread, the streets around Elland Road become submerged with jubilant (and many drunken) Leeds fans celebrating their clubs success. Chaos quickly spread, with hundreds of public order offences noted, as well as damage to multiple vehicles. 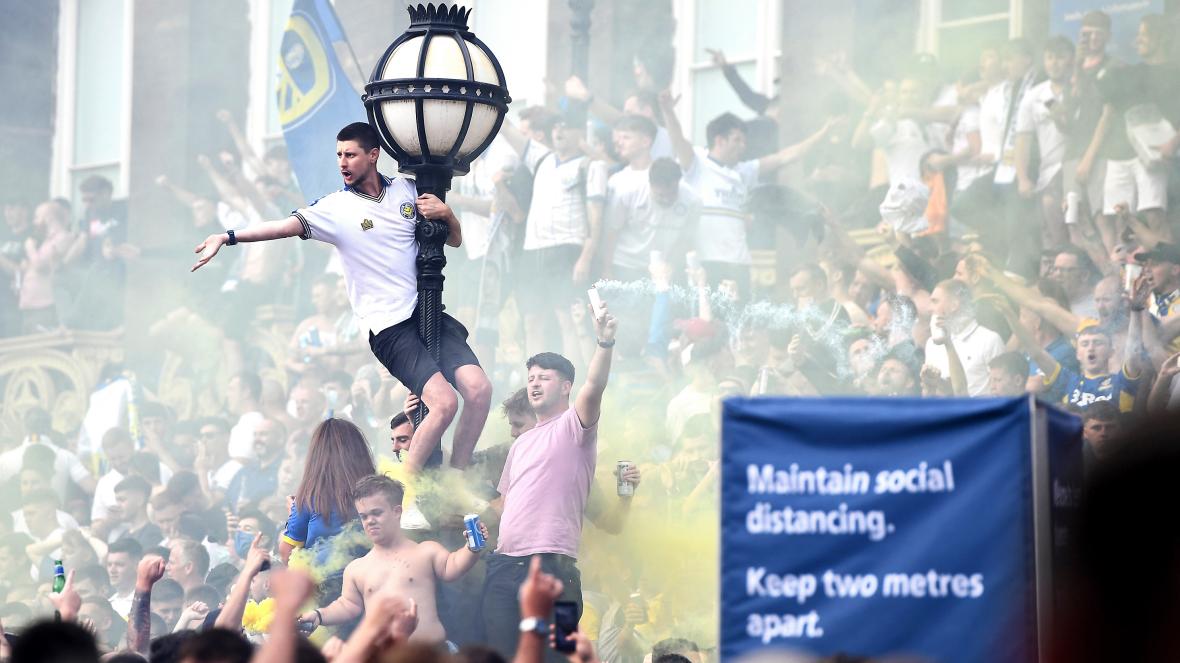 Media reports from the Mirrior have suggested that Liverpool and Spurs will battle it out next Summer for Kalvin Phillips. Phillips came close to leaving last Summer, admitting that his head was turned by Villa's interest in him. Fortunately, after speaking to Victor Orta, the 24yo signed a new five-year contract, tying himself to the club until 2024.

It's believed that Phillips earns £30,000 a week under his new contract, though both Spurs and Liverpool could double or even triple that. Is 50m what England midfielders go for these days? Bielsa will give skipper Liam Cooper a late fitness test ahead of tonight's game against Wolves. With Diego Llorente sidelined, Bielsa will be hoping that Cooper has overcome his groin injury he picked up on International duty with Scotland. Leeds will take no chances. If there is any doubt over his fitness, Cooper will be given a few days' extra rest ahead of a trip to Aston Villa on Friday night. Pascal Struijk stands by.

Jack Harrison should return to the starting line up having been ineligible to face his parent club Manchester City. Rodrigo is expected in the starting lineup following his impressive display against Citeh. 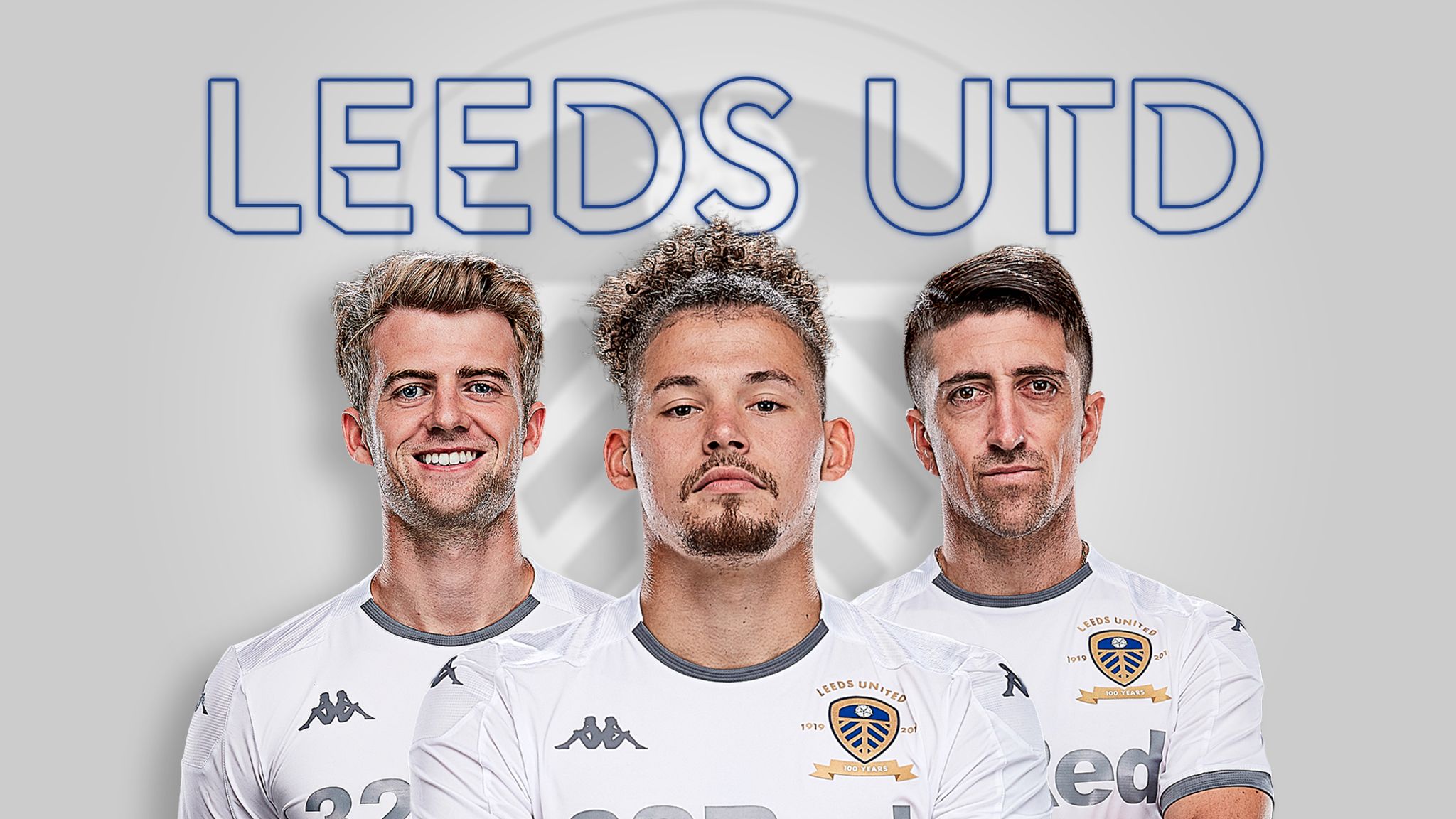 Its such a shame that our magnificent season gets spoilt by a few idiots but as a percentage of our actual fans I suspect this would be very low compared to others such as Brum , Bolton etc...

There may be a correlation between having something celebrate and the number of arrests made and we certainly had more to celebrate than all on that list but Liverpool last year - not an excuse but a possible reason.

DMF is a critical and pivotal position in today’s game (always was), if you get that right then you are well on the way to creating a good team. I hope against hope that we will not be tempted to sell but if we do I’d be looking at more than £50m if Harry Maguire is worth £80m!

I think Struijk, if required, will not let the side down and a win would see us up to 3rd place - an excellent start to the season.
Top

Its finally here. Monday night football is like having the last dentist appointment of the week.

The Bolton number is really high considering where they are. Bolton's arrest would be angry arrests where i'm sure most Leeds arrest will be elation based jubilation, just not the violent disorder ones.

If Liverpool are coming in for Phillips on triple money there's only one winner there. Although Liverpool have an embarrassment of riches in that department so i can't see it.

I think Struijk will come in for Coops and i thought he did well against Liverpool so hopefully all good there.

Come on the boys.
Top

mothbanquet wrote: ↑Mon Oct 19, 2020 8:32 am Leeds were champions. Champions means more cause for fans to celebrate. More cause to celebrate means more drunken idiots. This means nothing.

I'm not surprised with those figures one bit mate
Top

If we win tonight we go 3rd in the table

I'm perfectly fine with him tiring out the opposition in preparation for Pablo or Rodders. Might even contribute, you never know.
Top

Struijk was the better of the two CB's against Liverpool so I have no worries about him playing tonight.
His best position is DMF though in my opinion.
A ready made replacement or Kalvin if he does leave.
Top

mothbanquet wrote: ↑Mon Oct 19, 2020 9:26 am I'm perfectly fine with him tiring out the opposition in preparation for Pablo or Rodders. Might even contribute, you never know.

With a goal or at least an assist possibly?
Top

Or a successful dribble. Miracles can happen.

Rodrigo has to start over Roberts, he's just better atm though that's not criticism of Roberts. who's a striker for me learning to play the ten in MB's system

Leeds fans sold out their away ticket allocation pretty much every time last season and we know that many more have travelled ticketless as well. I wonder how many arrests were away games when tensions can run high.

That said we did see coin throwing in at least one home game. And I did see Huddersfield fans being attacked as they were leaving Elland Road last March.

The irony of course is you put the same people together in a Rugby League stadium and they are all mates...

Anyhow, Tonight.
Rodrigo to start, hope Raphina features at some point too.
'We can wait for the next game with serenity'

Leeds fans sold out their away ticket allocation pretty much every time last season and we know that many more have travelled ticketless as well. I wonder how many arrests were away games when tensions can run high.

That said we did see coin throwing in at least one home game. And I did see Huddersfield fans being attacked as they were leaving Elland Road last March.

The irony of course is you put the same people together in a Rugby League stadium and they are all mates...

Anyhow, Tonight.
Rodrigo to start, hope Raphina features at some point too.

It seems to be a herd mentality with football fans.....strange but true!
Top

We must get at Wolves from the start, not giving them the first 45 minutes of the game to settle!
Top

The top 2 in that league clashed at ER last season and there were a good number of arrests on both sides, take that game out and we're mid table.
Numbers are lower than i thought they would be all round tbh, remember when it was 150 plus for us most seasons.

A draw tonight wouldn't be the end of the world but I feel we can win this, as Ian said yesterday, the next 3 opponents will probably give us a clearer picture of what we can achieve this season.
There are non more easily offended, than those that want to be.
Top
Post Reply
20 posts • Page 1 of 1