Predict the scores...if you can!

Plenty to choose from - dip in and have a go - all MOT members welcome. Just for fun.
Post Reply
53 posts 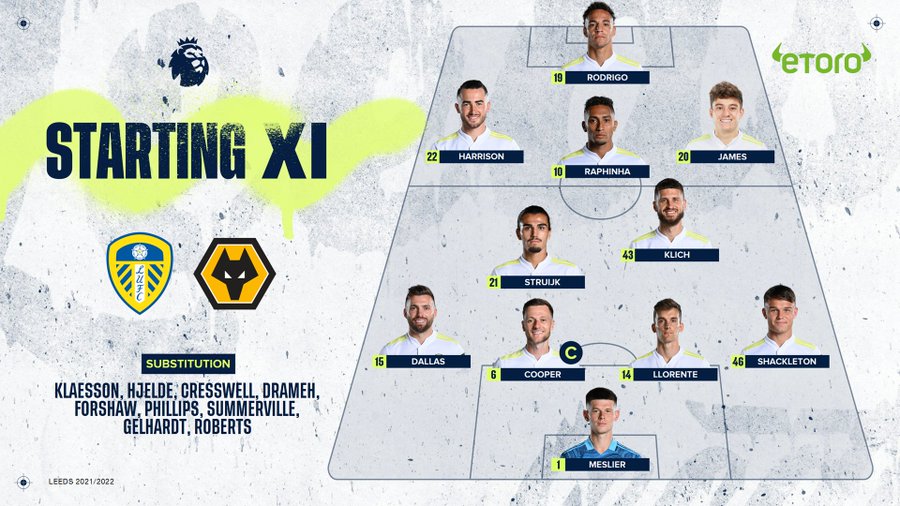 Unlucky for the goal, a Liam Cooper error gets punished
Raph best player on the park but Klich with some clever passing if we had a striker on the pitch
Rodrigo sitting too deep for me
Struijk too far up the park too
James as striker not really working yet
Leeds the better team for the most part, more like our old selves
Wolves falling down a lot
Was that a pen on 45?

Roberts on at HT for JH playing as striker
Roberts hacked down on the break
Raph hacked down after good through ball from Tyler.. FK for handball given!!
Results in a Raph injury and to be honest should have been a red !!
Summerville on for the injure Raphinha
Certainly deserve an equalizer
Gelhardt for Klich who's had a clever game,
Great cross James I think just touched away before Summerville can pounce
Only one team playing atm
Dive from Raul and FK close to the pen box, we're getting f**k all from this ref
GK when it should have been a corner
Yep another dive and another FK, maybe the worst ref we've had all season and we've had some bad ones
Roberts poor shot wide
Great effort from Gelhardt, great save and then great footwork to almost force another chance, Summerville shot deflected
Summerville skins his defender and is unlucky not to find a Leeds player in the box
Roberts helps the Wolves player off as he tries to waste time.. great stuff
Wolves player heads into touch clearly but they get the throw??
Gelhardt blazes over from close range, great chance
James wins the corner, so much better on the left
Summerville wins FK after good ball from Roberts. edge of box
6 minutes extra is
Misunderstanding there Roberts and Rodrigo who stopped his run
Pen Leeds after dazzling Gelhardt run so deserved and what a great game this has been. put away by Rodrigo..1-1 and two minutes left
Rodrigo has embodied this performance, he's absolutely everywhere. Magnificent today
Gelhardt final run and his shot deflected wide

Missed their goal due to stream not working.

Cooper error unfortunately and unlucky to concede from their only real chance, thought Meslier was quiet all afternoon. Surprised no Summerville as he had their full back on a string taunting him with skill and pace from the moment he came on. We didn't miss Raph at all
Last edited by faaip on Sat Oct 23, 2021 4:18 pm, edited 1 time in total.
Best 11, everyone fit - Meslier - Ayling - Dallas - Koch - Struijk - Phillips - Forshaw - Raphinha - James - Roberts - Gelhardt
Top

I rarely stray in here but here goes.

Hard to give MOTM to someone who played only 30 minutes, but Gelhardt was clearly the difference in the match.

And an honourable mention to Meslier for his cool footwork under pressure and setting that attacker on his ass.
Top

I only saw the last half an hour (during which it was practically one way traffic for the full 30 mins.........I couldn't believe we losing the game

faaip wrote: ↑Sat Oct 23, 2021 4:15 pm Cooper error unfortunately and unlucky to concede from their only real chance, thought Meslier was quiet all afternoon. Surprised no Summerville as he had their full back on a string taunting him with skill and pace from the moment he came on. We didn't miss Raph at all

He had a good game. Perfect game for the kids as Wolves sat in for long periods of the match.
Top

No Dallas? He kept Traore fairly quite and they then subbed him, allowing Dallas to influence our attacks as an extra body which kept Wolves hemmed in.

Wanted to have Summerville in, but would need to leave one of the others out and imo, bar Joffy, they contributed more but only because they were on the pitch longer.
Top
Post Reply
53 posts