Help support the site by using our Amazon Affiliate link when making any purchases from Amazon.
Post Reply
281 posts


Brentford make the long trip up the M1 for a lunchtime kick off at Elland Road on Sunday. Thomas Frank has had a fantastic start to his top flight Managerial campaign, orchestrating wins against Arsenal, Wolves and West Ham as well as a credible 3-3 draw against Liverpool. Recent defeats against Burnley and Norwich and another 3-3 draw (against bottom of the table Newcastle Utd) place the South West London outfit one point, and four places above Bielsa's team. They'll hope their 1-0 home victory over Everton last weekend will give the Bee's confidence.

Patrick Bamford completed 90 minutes for the U23's during their narrow 3-2 defeat at Manchester City on Monday evening. It remains to be seen whether Bielsa is ready to throw him back into the starting line up. Cody Draham (ankle), Pascal Struijk (ankle) join long term absentee Robin Koch on the treatment table. Luke Ayling could return to action on Sunday after completing 45 mins on Monday as he looks to regain his fitness levels after minor surgery on his knee.

Joe Gelhardt must be wondering when he's going to get hi next opportunity. The 19yo England star was an unused sub against Brighton and Crystal Palace, and with Bamford coming back, his opportunities will be even more limited.

Brentford face a trip to local rivals Spurs on Thursday night, before their outing to Elland Road less than 72 hours later. Let's hope this works in Leeds favour!

Sergi Canos, Rico Henry and Christian Norgaard all returned from knocks suffered in Sunday's 1-0 win at home to Everton by starting Thursday's clash at Spurs but David Raya, Josh DaSilva, Kristoffer Ajer and Mathias Jorgensen all remain out.

Unpredictable that's what they are... Should we have enough? I would like to think so. Two of the big characters back to give the lads a lift. Its all looking rosy & jim in the garden. Do we trust Firpo? Or will Dallas move over and Bill come straight in? Paddy or Roberts Decisions decisions.
Top

Dom Matteo "haven't celebrated a goal like that in a long time, I went mental in the West Stand.

Football has been paying tribute to poor Arthur Labinjo-Hughes on the 6th minute, hopefully us and Brentford follow suit
Signed

Regarding the match it's a must win imo.

With our performances this season we are unlikely to win any of the next 4 after, even drawing is unlikely without a significant upturn in performance

We don't want to be in the relegation zone by the time we play Villa on the 28th, therefore we really do need to win tomorrow and perform well to give us confidence.

Scraping by with a late pen isn't enough.
Signed

Funny old results in the premiership results turn out different from what you would expect. Even the top teams can get turned over. Expect the unexpected.

Who knows wirh Brentford... they tanked Arsenal in their opening match

It is hard to say who will win but i believe Leeds are on an upward arc and Brentford on a downward, but form at the moment does not seem to count for much. Slight glimmer of hope is that Leeds have players returning from injury, and Brentford have a lot of injuries to contend with. Hopefully the fans at ER will carry the day.
Top

Three points would be very welcome today.
Team morale would then be high going into a tough run of fixtures against European Super League opposition.
Top

We must get a point at the very least but in all honesty I expect us to win this game.
A loss would be a disaster in front of the run of games we've got coming up.
The flowers of common sense do not grow in everyone's garden
Top

Here I go heading to ER

I hope you witness a solid victory today 64, it would be nice to put a bit of distance between us and the relegation places before the tough run coming up.

There Is Only One United.
Top

Just over an hour away from Leeds now. A victory would give us a cushion of 8 points from the bottom three, may take us upto 11th position pending on the other results.
Top

Make sure you do as good a job supporting the boys as you did on Tuesday. 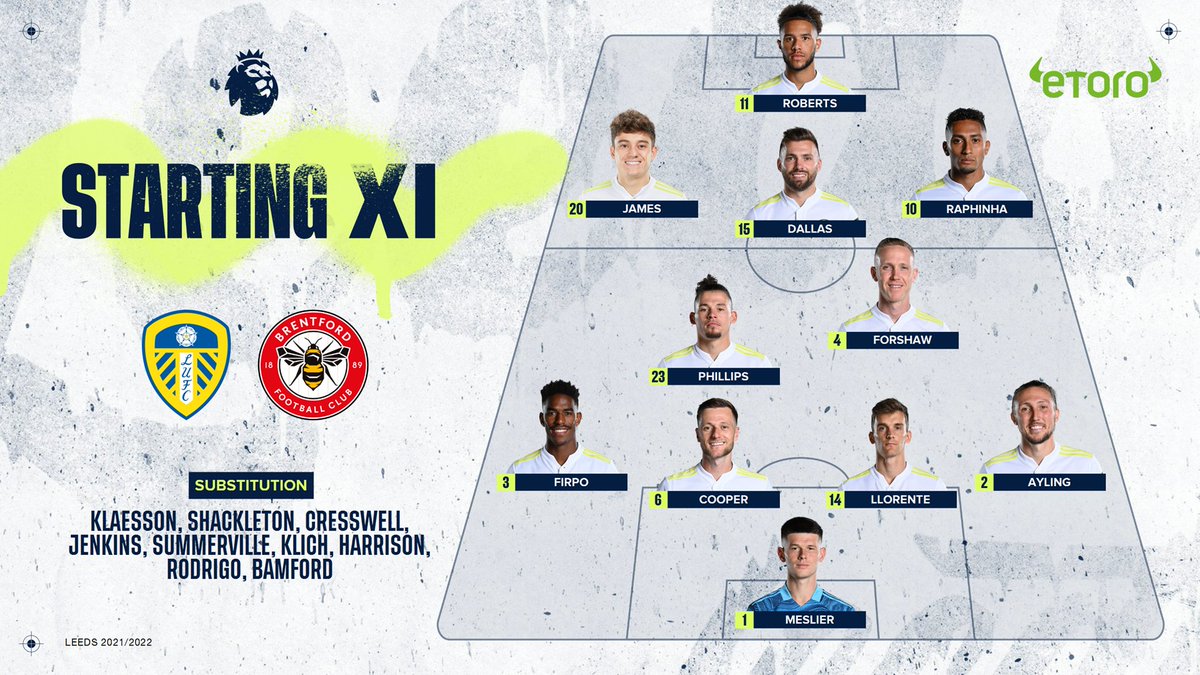 Firpo in for Struijk, Ayling starts, Bamford on the bench. Maybe our best mid three in Forshaw/Dallas/Phillips all interchangeable