Help support the site by using our Amazon Affiliate link when making any purchases from Amazon.
Post Reply
24 posts

Good Morning. It's Monday 8th August, and here are the latest headlines from Elland Road...

Leeds started their 22/23 campaign in style, coming back from a goal down to beat Wolves in front of a packed out Elland Road crowd. This was the third time in as many games that Leeds had trailed their West Midland adversaries, only to deliver a sucker punch when they least expected it.

Last October, Rodrigo's 94th minutes penalty cancelled out Hwang Hee-chan's 10th minute strike to share the spoils. However, the pièce de résistance of comebacks took place in March, shortly after Jesse Marsch had taken over. Leeds found themselves 2-0 down, with only thirty left on the clock. Goals from Harrison, Rodrigo and an injury time winner from Ayling, completed Wolves misery on that day.

Leeds got off to the worst possible start after just five minutes. Pedro Neto outmuscled Kristensen deep on the left wing. His cross field long ball was headed down by Gibbs White into the pathway of Daniel Podence. His mishit volley smashed into the ground before bouncing up and over Meslier with the assistance of the underside of the crossbar.

Gradually, after a poor start, Leeds began to settle, and create chances of their own. Halfway through the first half, they got their reward. Arronson robbed Gibbs White of possession in his own penalty area, after the visitors failed to clear their lines. The ball fell kindly to Rodrigo, who fired a diagonal shot, hard and low past Sa at his near post. It was his fourth goal in two games, and third strike in as many matches against Bruno Lage's team.

Wolves looked the more dangerous side going into the break; only acrobatic saves from Meslier, kept the scores level at half-time. Leeds were the more dominant side in the second half, and deservedly got their winner fifteen minutes from time. Second half substitute Klich carved open the Wolves defence, releasing Bamford deep on the nearside penalty area. His low cross into the penalty area caused Rayan Ait-Nouri to turn the ball past his own keeper after pressure from Aaronson. 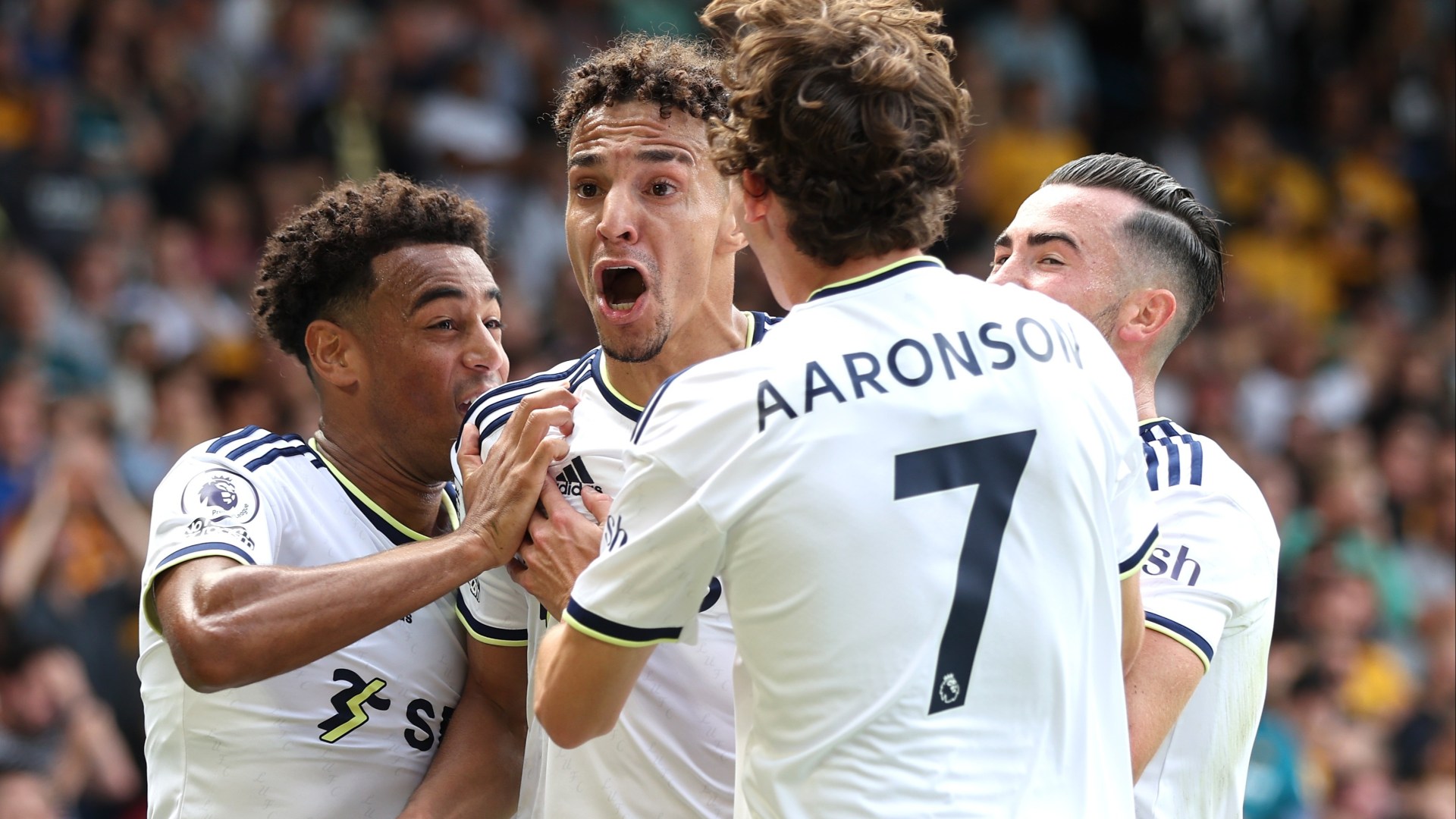 There are some things that you cannot say

Jesse Marsch and Bruno Lage exchanged angry words following the final whistle as tempers threatened to boil over. Lage was clearly unhappy about something Marsch had said during the first half and launched a verbal assault on the American. Marsch retaliated, and it seemed the incident may have escalated, but Lage retreated. During his post match presser, the Portuguese coach revealed:-

Nothing against the manager, they won and it was absolutely great,” “But there was a point in the first half when I heard something I didn’t like and I said that to him. When you come in the end and say, ‘Apologise' There are some things, in my opinion, that you cannot say and I just said that and after that I didn’t listen.

But the most important thing is that Leeds won so congratulations to the team, the players and the manager because we lived today an amazing moment with a great atmosphere and I’m here to play the game the way we want to play.


Marsch too, played down the incident, adding...


“It’s normal. I respect him (Lage) a lot and he does a good job with his team. So no problem. You could go back to Wolves away last year. It was emotion. I wanted to be respectful afterwards. But it didn’t quite go that way. But I’m OK and I think he’s OK. 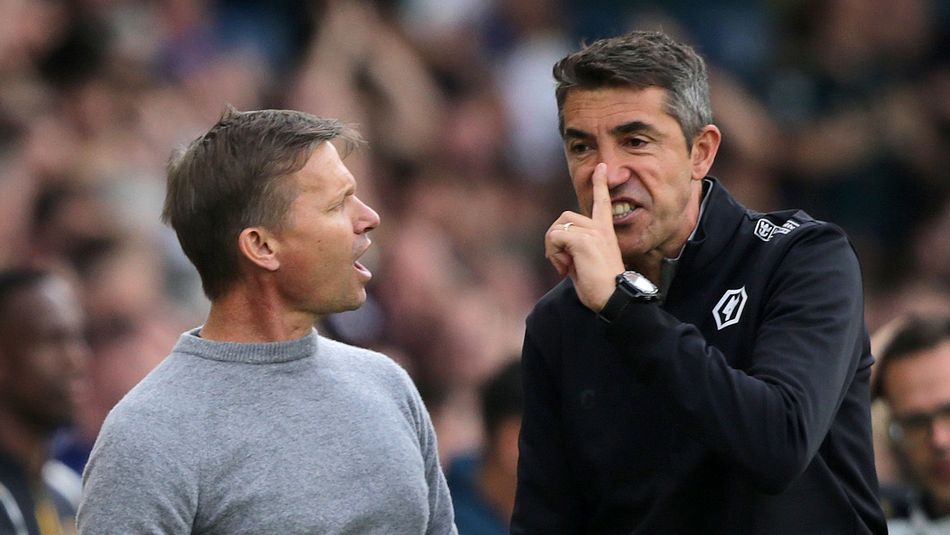 The Daily Mail has reported that a shipping container of Leeds shirts has plunged into the sea. The cargo was headed for South East Asia where support for West Yorkshire's finest is growing fast. A severe outbreak of Covid in Singapore, (where the Leeds shirts are manufactured) has already slowed down production, and it is now feared that the latest hold up could have a detrimental effect on shirt sales, which are normally around 300,000.

I can take orders for shirts, obviously not

>Shipping container of Leeds shirts plunge into sea<
That's a bad omen, if you are superstitious.
Top

Looks like next pre-season will be in South East Asia.
Top

Good and welcome win - let’s see if we can carry on in the same vein at Southampton next week, if we can 6pts out of 6 will give us a mighty boost for the rest of the season. I may be getting ahead of myself but one lives in hope and it’s a definite possibility.
Top

Morning all.
It was a game we deserved to win, wolves came at us and messlier did well on a few occasions, but, we still had the better and overall deserved the 3 points, a team like wolves who are only out to completely frustrate the opposition at every opportunity, diving, cheating, feining injury, breaking up the game as a flowing spectacle, well, they got what they deserved, bollock all, hope they are relegated with those kind of tactics.
I'm still concerned with the ease of how we are carved open, but, hopefully we will have enough going forward to score more goals in games against lesser clubs to keep us up, I can however see us getting tanked a few times unless we have a plan B.
Bamford isn't the answer as yet again he missed 2 chances that any decent CF would devour.
A win next week would be great, but at this stage I'd take a draw, southampton probably would as well.
Keep Fighting
Top

So the shirts were the new away kit. The tye dye ones. Currently being sported by cod & lobster
Top

Nice win. Dug deep, ride out the storm,made the correct subs and went for the win.

Jesse likes a wind up by the look.

Re the shirts.
Fell if the back of a fishing boat is classy...
'We can wait for the next game with serenity' Marcelo Bielsa

WestgateRun wrote: ↑Mon Aug 08, 2022 9:11 am >Shipping container of Leeds shirts plunge into sea<
That's a bad omen, if you are superstitious.

Plus the hole in my Leeds sock...
'We can wait for the next game with serenity' Marcelo Bielsa

Good on Jesse, take no s**t from these arseholes.

WestgateRun wrote: ↑Mon Aug 08, 2022 9:11 am >Shipping container of Leeds shirts plunge into sea<
That's a bad omen, if you are superstitious.

Adidas: “The shirts were designed with this kind of mishap in mind and we are hopeful of still being able to sell any we recover - even if the colour runs or they float through an oil slick.”
Last edited by Aussieleeds on Mon Aug 08, 2022 11:41 am, edited 1 time in total.
Top

I assume Jesse called Ching Wang Chan (whatever his name is) a cheat as he rolled about feigning injury near the dugout.

Go on Jesse, tell these cheating game spoilers for what they truly are

FA needs to look at dives in retrospect and start handing out suspensions, incrementally...
Cry Summerville and let slip the dogs of war

Imagine future generations hauling that crate up from the seabed, hoping to unearth riches and instead finding the worst football shirt ever conceived.

Enjoyed Saturdays game and we played ok, I think there is more to come, hopefully sinisterra back soon as think him kn the right and Aaronson in the middle will be better balanced. still not convinced by the tactics defensively but happy if we keep getting results - it’s of course not must win on Saturday but Southampton are a team we need to be taking something from.
Top

Suppose Southampton will be looking to bounce back after losing their opening game.
There Is Only One United.
Top

billysboots wrote: ↑Mon Aug 08, 2022 12:17 pm Suppose Southampton will be looking to bounce back after losing their opening game.

Can't read too much into opening day form but Wolves are a better team than Southampton right now. I'd take a good draw
Cry Summerville and let slip the dogs of war

Haven't had the chance to watch the game yet, but sounded promising. Glad Marsch is giving it back a bit as I think that kind of bite is needed in PL given half the other managers are WUMs. Though I loved the classy respect Bielsa gave and how that rubbed off on the players, Marsch's way also has benefits on the opposite side of the scale in firing his players up and how he is 'protecting' them. My only fear is he takes it too far and makes himself out to be a twot at some point.

Anyhow, great start to the season; 3 points not to be sniffed at, and I'd be delighted if we leave St. Mary's with a point at minimum. Could go either way, but in my mind we are marginally the better team, but they have home advantage which levels things out a smidge.
Top

Aussieleeds wrote: ↑Mon Aug 08, 2022 11:23 am Adidas: “The shirts were designed with this kind of mishap in mind and we are hopeful of still being able to sell any we recover - even if the colour runs or they float through an oil slick.”