Help support the site by using our Amazon Affiliate link when making any purchases from Amazon.
Post Reply
10 posts • Page 1 of 1

Good Morning. It's Thursday 29th September, and here are the latest headlines from Elland Road...

Italian journalist Carlo Pellegatti claims AC Milan are still keeping close tabs on Luis Sinisterra, and believe they can prise him away from Leeds for €25m - €35m (£22.5m - £31m). The 23yo has been in fine form for both club and Country since his £23m Summer move, finding the back of the net against Barnsley, Everton and Brentford domestically, and bagged a further three goals during the recent International break.

Whilst Pellegatti has clearly been on the vino, if he believes Milan stand a chance of stealing Sinisterra away from Elland Road on the cheap, it does highlight the fact, Leeds have unearthed a rare talent. His goal scoring record at Feyenoord was remarkable, but the Whites took a massive gamble whether he could make the step-up from the Eredivisie to the Premier League. According to Pellegatti...

My big dream is only one, Luis Sinisterra. At Feyenoord he played on the left, but at Colombia and Leeds he starts from the right. “He reminds me to death of Leao, even if he is less overbearing and devastating in the race. But he has great class and confidence, he reminds me of Rafa.”

Having one on the right and the other on the left, with De Ketelaere as an attacking midfielder, would drive me crazy. Moncada [AC Milan's chief scout] followed him, Milan likes him. He has a market value of 25-35 million, therefore in the range of the club. 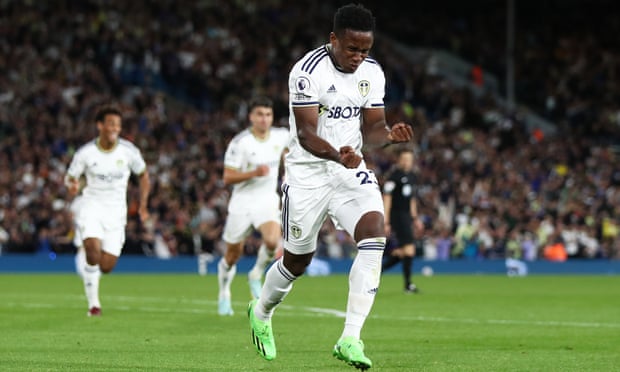 Rasmus Kristensen will battle it out with Luke Ayling for the right back slot this weekend, for the visit of Aston Villa. The 25yo returned to action for Denmark during the International break, following a three-week lay off with a knock he picked up in training. He averaged an hour against France and Croatia giving him a good chance of starting on Saturday.

Ayling too has returned to full fitness following knee surgery at the end of last season. Following his cameo role against Brentford almost a month ago, he gave a good account for himself for the U21's (as a substitute) in their 6-2 win against Southampton, and has worked hard in the meantime to get match fit.

Kristensen hasn't had a great start to his Leeds career, but perhaps with Ayling back in contention, he will push himself further. Who would you start with at right back on Sunday?

Meslier fifth most ‘impactful’ keeper in Europe under 25

According to data collected by the 'CIES Football Observatory', Illan Meslier is the fifth most ‘impactful’ goalkeeper in Europe under the age of 25.

Level of competition, individual performance and minutes are all contributing factors, taken into consideration when calculating the statistics, which gave the 22yo a score of 84.5. Only Aaron Ramsdale - Arsenal, Gregor Kobel - Borrusia Dortmund, Diogo Costa - FC Porto, and Gianluigi Donnarumma - PSG had better averages. Not only did Meslier make the top five, but he was the youngest keeper in the top 10.

Roca - signing of the season so far.

Graham Smyth, the Chief Football writer for the Yorkshire Evening Post, has labelled Marc Roca as 'the signing of the season so far'. The 25yo has enjoyed a good start to his Elland Road career following his £10m move from Bayern Munich in the Summer. His overall stats on 'Whoscored.com' show his overall contributions, make him Leeds fourth-best player this season, behind Rodrigo, Struijk and Harrison. Fellow new recruits Adams is 5th, Arronson 6th, Kristensen 7th and Sinisterra 8th. According to Symth...

Arguably the signing of the season so far, his contribution to getting Leeds up the pitch has been massive. A lovely passer of the ball and a player who operates gracefully in the middle. Likes a tackle, too.

Interesting as it's Adams that has caught the eye a lot more than Roca, not denying he could be signing of the season for us but there will be so many in play for that award come seasons' end.

faaip wrote: ↑Thu Sep 29, 2022 7:58 am Interesting as it's Adams that has caught the eye a lot more than Roca, not denying he could be signing of the season for us but there will be so many in play for that award come seasons' end.

not including the exciting youth we've added

No doubt about it that Kristensen has made the least impact so far, so much so that I’d have Ailing to start versus Villa.

Surely we must be able to hold on to Sinisterra for at least a season or two and not have to sell him on the cheap - £22.5m indeed, what a cheek!

At his age Meslier can only get better and by that reckoning it won’t be long before he’s the best in the world. As the selling club we now are, he could be our best ever money spinner!
Top

This feels like the Barca pressure applied over Raph.
Drip drip water torture style. They just keep chirping away.
Top

Bit early for the 'signing of the season'.
A self-confessed lover of Bigots, Walts, Otters and Dandelions.
Young Kennyboy

So sinnesterra cost £20million and has a 5 year contract with us - if he has a stellar season there is no way Milan would get him for less than £50 million.

Like to see ayling get a start if fit but can’t forget he had a poor season last year - it’s a place thats up for grabs though as kristiansen hasn’t done enough with the opportunity he had.
Top

Sinisterra is going nowhere for at least two years.

Milan can jog on.
I smell blood and an era of prominent mad men - W.H. Auden
Top

See a similar story to Raphinha. Which would hopefully mean us enjoying a couple of good years and doubling our money

Ayling should start, I believe. If he is fully fit it forces JJesde into a decision. Ayling just looks better right now. Rasmus has time to establish himself.

Like others, I think Adams has-been the stand out. But Roca has looked good. And a bargain too. Great combo of signings the 2 of them.

Meslier - yeah we all know. I'd say his impact is greater than Ramsdale and Donnaruma given the difference of quality in front of them.

Now let's plan some football.
We've been through it all together. And we've had our ups and downs
Top
Post Reply
10 posts • Page 1 of 1