Help support the site by using our Amazon Affiliate link when making any purchases from Amazon.
Post Reply
287 posts


Leeds make the short trip across the Pennines to face a recently rejuvenated Burnley side, who have netted seven times in three games. The credit for the recent turnaround can mainly be attributed to a player Leeds fans know all too well. Chris Wood scored 41 times in 83 appearances for the Whites over a two year spell, before the lure of the Premiership got too much for the New Zealand International. Since signing for the Clarets four years ago Wood has been consistent, but has not set the World on fire - until now! The in form hit man has scored five times in the last three games, bringing his total for the season up to twelve, three less than Bamford. Those of us that remember Wood, know he is a striker who thrives on confidence. The Whites will need to very cautious of any Burley set pieces!

As we know, Bielsa does not like meddling with the team sheet unless he absolutely has to, let alone after destroying Spurs 3-1 last weekend. But Phillips and Raphinha will return to the starting eleven in place of Robin Koch who misses out and Tyler Roberts who drops to the bench. Rodrigo and Cooper make the bench. Helder Costa will miss the remaining games of the season season with a back injury sustained in a challenge with Manchester United defender Aaron Wan-Bissaka last month. The ever reliable Stuart Dallas will start, thouoght it's not yeat clear whether out on the wing or in the middle of the park alongside a rejuvenated Mateusz Klich. Burnley defender Phil Bardsley is a definite injury absentee, while goalkeeper Nick Pope and midfielder Dale Stephens were assessed late on but will miss out. That means former Leeds United academy graduate Bailey Peacock Farrell will start in between the sticks for Burnley.


Last time out Leeds were one nil victors. Leeds took the lead after just 5 minutes when Nick Pope brought Patrick Bamford down for a penalty. Sean Dyche thought it was a controvetial descision but the striker was clearly taken out by Pope. There was further controvorsy 13 minutes later when Ashley Barnes appeared to capitalise on Illan Meslier's mistake to spin inside the area and fire the loose ball into an empty net. The 20-year-old Leeds goalkeeper was awarded a free-kick by referee Rob Jones, despite spilling the ball forward in what seemed like a fair aerial challenge with Ben Mee. But Leeds managed to hold on for the victory in a somewhat backs agains the wall performance. Let's hope we see the more familiar free-flowing Leeds United today!

Burnley could win four consecutive home league matches against Leeds for the first time. However, Leeds are vying to earn an unprecedented fourth straight top-flight victory in this fixture. Burnley could set an outright club record of nine consecutive top-flight home league games without a win. They last endured a nine-match winless league run at home in the third tier in 1998-99. Leeds have only lost one of their past eight league matches, winning four and drawing three. They are the only side yet to draw a Premier League away game this season and are on a nine-match away league run without a clean sheet. The Whites are one game away from equalling their club record of 24 consecutive away league games without a draw. Patrick Bamford could become the first Whites player since Peter Lorimer in the 1974-75 campaign to score home and away against Burnley. 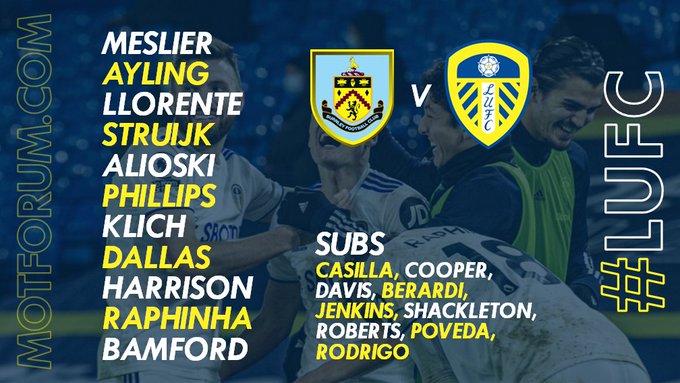 Burnley were in a good run of form the last time we played them, a run to which we put a swift end. We'll do it again.
Top

It's good to see that Chris Wood is doing well. I thought he was a real threat when he played for us, never was that quick though and seems to have slowed down even further. Less said about Charlie Taylor the better after that match he refused to play in, and BPF just ain't good enough imo.

I honestly expect that with our best players available we'll muller this lot. I would go with:

It's tough on Klich and Koch, but you have to pick your best side, we looked a miles better side going forward when the three subs came on last week. Roberts doesn't do enough for me, and I don't think he ever will.
Top

Burnley were spewing they didn't take anything off us last time.

Being denied a pen shout and having a goal chalked off all at the same time.

Of course we will face a side who will be overly physical, and will deny us room like Brighton did.

First goal has to be ours for us on Saturday.

I expect the same starting 11 as last week.
'We can wait for the next game with serenity'

I'm not sure whether Phillips will replace Koch but I reckon Raphinha will start.
The flowers of common sense do not grow in everyone's garden
Top

Sean Dyche has indicated that Pope is still suffering from the shoulder problem which sidelined him for two matches last month, and with Premier League football now secured he could be rested to avoid the issue getting any worse.

Phil Bardsley is out with a hernia problem, while manager Dyche confirmed neither Robbie Brady nor Kevin Long would return this season.
Top

Struijk deserves his place alongside Llorente

but who knows?
Top

Sean Dyche has indicated that Pope is still suffering from the shoulder problem which sidelined him for two matches last month, and with Premier League football now secured he could be rested to avoid the issue getting any worse.

Phil Bardsley is out with a hernia problem, while manager Dyche confirmed neither Robbie Brady nor Kevin Long would return this season.

The script is written:
Bailey Peacock-Farrell plays a blinder and we lose 1-0

Will be a different type and tougher game than against the lazy, overpaid Prima Donnas of Tottenham. Still think we will run out winners though. Come on Leeds!
Top

Was thinking the same thing Chilli

Burnley are scoring loads of goals lately so should be a good game. I dont think Burnley's players will be on the beach yet they will want to win
Top

I think we'll be fine. Bielsa has Dyche's number.
Top

I like the Dallas, + Klich combo in the centre of midfield
Last edited by HarryofOz on Sat May 15, 2021 10:44 am, edited 1 time in total.
A Roman walks into a bar, sticks two fingers in the air and says 'five beers please'.
Top

Not sure id have dropped Koch for KP tbh given Burnley play 2 up top and Koch is a natural cb which KP isnt.
Top
Post Reply
287 posts