Help support the site by using our Amazon Affiliate link when making any purchases from Amazon.
Post Reply
22 posts

Good Morning. It's Friday 15th May, and here are the latest headlines from Elland Road...

Further to Wednesday's board meeting, the EFL have released a statement to hopefully add some clarity about the resumption of the season.

The EFL Board has met today to further consider the many complex financial and operational matters resulting out of the COVID-19 crisis, including how the 2019/20 campaign is concluded.

While there is much debate and discussion taking place publicly and privately regarding what should, or could, happen next, the EFL will continue to undertake consultation with our members before the next steps are determined.

Current attention is clearly on the immediate next steps, but the long-term impact on the League and its Clubs remains as stark as previously outlined, and solutions are still required to fill the financial hole left by the crisis. The consequences of the COVID-19 pandemic will not be rectified simply by a return to play behind closed doors.

In addition, the EFL is mindful of the pressing need for clarity in a number of areas, including the practicalities and timeframes of Clubs being able to facilitate a return to training. To address this, Clubs have today been issued with the latest draft of the EFL’s ‘Return to Training Protocols’, so that they can prepare appropriately.

However, until all outstanding matters are concluded, including finalising a comprehensive testing programme on matchdays and non-matchdays, the EFL Board has informed its Clubs that a return to training should not take place until 25 May at the earliest.

Dialogue continues with our colleagues across the footballing and political landscape regarding these and other issues, and the EFL is committed to keeping all relevant parties updated on key decisions and developments as they occur. Leeds Utd Managing Director gives his insight following a long drawn out meetings the Premier League, EFL and the FA have had with its members, and what it could mean for Leeds Utd.

Details around return-to-training protocols have become more granular, allowing our medical and performance team to interrogate them and finalise plans how they will be applied to Thorp Arch.

Our protocols will align with the Premier League and twice-weekly testing and sanitising procedures will ensure that our training ground is one of the safest environments for anybody to return to work to.

Our players are now stepping up their individual training programmes and are eagerly anticipating returning in small groups.

It seems likely that any return to play will be done against a media backdrop of clubs continuing to publicly champion obstacles to the league’s completion and, if it can’t be concluded, why leagues should be expunged [or relegation and promotion abandoned] as opposed to be decided on sporting merit.

To date, this has included trying to set the brilliantly audacious precedent that Premier League teams shouldn’t have to play matches if they don’t think they can win them and the equally Machiavellian suggestion that a team could refuse to be relegated if they believe that the promoted team is not deserving of being their replacement.

However Greg Clarke, chairman of the FA, provided important clarity to the debate when he stated that the FA would use their golden share in the Premier League to protect the core promotion and relegation principle of the English football pyramid.

The World Health Organisation (WHO) has just reinforced that this virus is likely to be with us forever and that society is going to have to adapt to co-exist with it.

In light of this, the challenges that the football industry is currently facing are representative of the issues facing broader society.

Cowering in our caves and hoping for this pestilence to miraculously disappear to then re-emerge to see what remains of the game we love cannot be the answer.

We need to channel our human strengths of ingenuity, courage and collaboration to get our game quickly back on its feet so it can be stronger in the long term.

As it was confirmed that the remainder of this season will definitely be behind closed doors, we were able to announce that we will start the process of recompensing season-ticket holders and hospitality guests for the games they will not be able to attend. The social media response to the statement could only have come from fans of one team.

Hundreds of supporters declared the club should keep the funds, with reasons ranging from the fact that three-quarters of a season of Bielsaball had already provided value for money, to the contingent that the cash went towards the acquisition of Ben White.

These loyal gestures, in such a challenging period, demonstrate that the club is more United than at any time in its recent history. Whilst being able to retain a portion of these funds within the club will be invaluable in the most demanding of financial situations, we will endeavour to give all supporters club credit or alternative value in excess of the amount owed, however, for the fans who want, or need, it, full refunds will, obviously, be provided.

On Wednesday, over 200 members of our staff came together on a video call to be updated on how we will return to play and how they will transition back to work. As well as confirming that I definitively have the worst self-administered lockdown haircut, it also reinforced what a hardworking and loyal team this club has.

The overriding mood is one of frustration that our business this season remains unfinished and we could not wish for a more committed group of individuals to take this club back where it belongs.

Finally, this week our friend and legend Norman Hunter made his last journey down the tunnel and onto the pitch at his beloved Elland Road.

We are grateful to Norman’s family for allowing us to film this poignant moment so that hundreds of thousands of fans could join in bidding him farewell.

The funeral was, rightly, a private affair but we remain committed as a club to giving all supporters the opportunity to celebrate his life and re-open the stand renamed in his honour when we can once again all be together at Elland Road.

Phil Hay has opened up old wounds by writing a piece on Alan Smith's transfer to the dark side.

Even though this was 16 years ago, many fans on social media have not forgiven the Rothwell born former striker.

Nobody wants to lose home grown talent, especially to an arch rival, but surely, the writing was on the wall on the last day of the season having been relegated.

Did Leeds Utd, or Smithy have any option?

Such was the anger at the time, that a house in Middleton lane that had Leeds United badges outside on the gate pillars, got pelted with stones because a false rumour got out saying his mum and dad lived there.

Leeds received £7m, and Smithy gave Leeds his signing on fee which was 1m.

How were your feelings at the time? 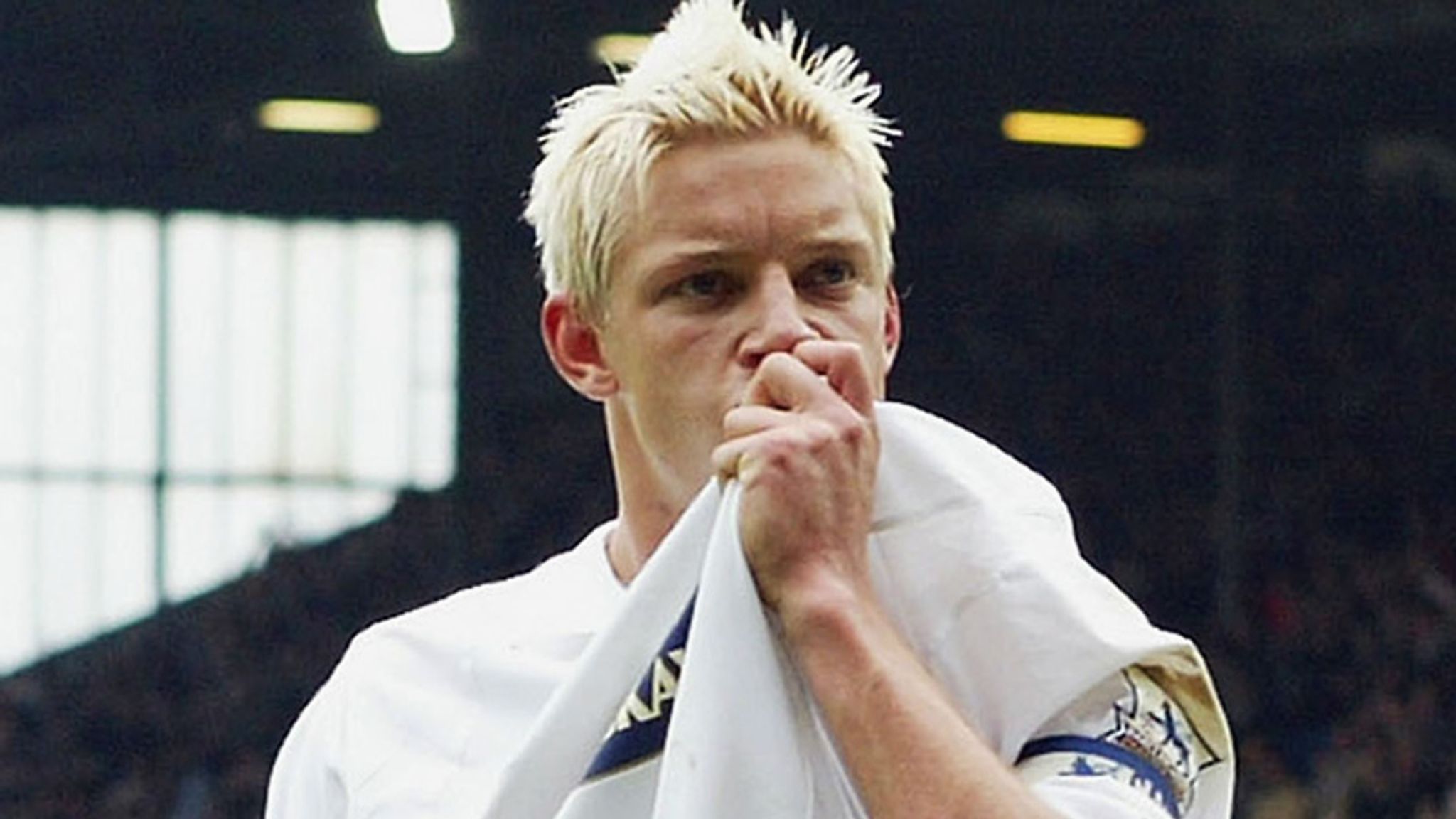 Traditionally, this week Championship clubs are expected to release their retained list. The amount of outstanding talent that is out of contract is absolutely shocking.

Can you build a team from the out of contract players that would be able to challenge for a promotion push next season?

Are there any players apart from Boro's Ayala that you would snap up, and take to the Premier League?

Sorry haven't been on much as usually just use my work computer. Is there any possibility that they will just restart the season or does this one need to be finished?
Top

I think there are a few, decent players in the list, in days gone by but non I'd want now, non of them imo would be good enough for the PL

I've no ill will towards Smith, they were the only ones offering the money, he gave the club back his fee. Risdale was at fault, if he'd have shown more restraint and professionalism non of it would have happened, he must be the worlds worst poker player, look at us we've loads of cash, what do you want, oh s**t we're in trouble, just give us what you think.
It will all come clear in the end
Top

Nothing to fogive Smith for....
Honey dipped flim flam
Top

Absolutely, and from what I've read very very few fans are anti-Smith.
A Roman walks into a bar, sticks two fingers in the air and says 'five beers please'.
Top

Hopefully just a training top.
It will all come clear in the end
Top

Why does the 32 red point to the groin

Much prefer the grey/pink away top.....I even bought one

Absolutely loved Smithy both as a player and when we saw him after games for the kids to get his autograph he had time for everyone and was always charming. I've always been gutted for him about the reaction to his transfer and hope it eventually gets better but some seem so blinkered and irrationally ignore the reasons it happened and how he tried to help the club out.
Top

I've got the light blue 3rd top and I love it.
Top

In terms of Smith I always felt he was over rated. Sure he put a shift in but scored nowhere near enough goals as a centre forward. As such I wasn't overly bothered when he went to MU but it showed that he wasn't good enough to be a striker by the fact that he couldn't score enough goals to hold down a place up front and ended up moving into midfield. He made the most of his limited ability by running around like a daft tw*t.
Senor El Weasel
Top

weasel wrote: ↑Fri May 15, 2020 4:55 pm In terms of Smith I always felt he was over rated. Sure he put a shift in but scored nowhere near enough goals as a centre forward. As such I wasn't overly bothered when he went to MU but it showed that he wasn't good enough to be a striker by the fact that he couldn't score enough goals to hold down a place up front and ended up moving into midfield. He made the most of his limited ability by running around like a daft tw*t.

Leeds have had a bid accepted by Linfield for Irish sensation Charlie Allen.

A number of top clubs were after the 16yo's signature.

Leeds had to move quickly to outmaneuvering Spurs who believed the Northern Ireland School boy was on his way to North London.

As forward cover, Lyle Taylor might be worth a punt and Fernando Forestieri as a number 10.
I don't think I'd want any of the others though.
Top